We first shared Whiplash's hand crafted wooden Wing Commander models several years ago. After recently retrieving the ships from storage, he's now embarking on a new mission to retrofit and update the designs with the model-building expertise he's gained in the ten years since they were first put together. Right off the bat, his never-before-seen Paktahn bomber joins the fray. Soon rework on the Hellcat begins! 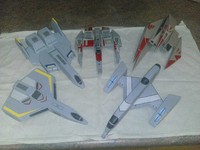 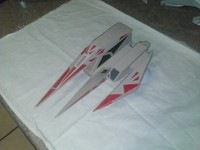 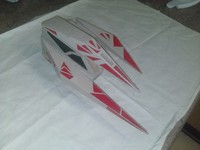 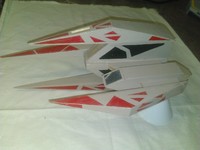 The family has finally been re-united! After a decade gathering dust at my parents' house, I finally took the plunge and moved my entire model collection to my own place. There are many, many others I won't show here, since you guys will be interested in the Wing Commander stuff. So, without further ado, here they are:

You'll see they've been joined by a new member: The mighty Paktahn. I never posted pictures of it before since it is still unfinished. Hopefully that will be rectified soon.

I'm a long time model builder. I started off with plastic kits and I've since progressed to scratch-building my own designs from balsa wood. Building something from scratch as opposed to using a model kit obviously means you have to draw your own plans to work from. This involved hours of taking measurements from the game manuals and even from in-game screenshots to get the look right.