These Graceful Arrows Have Teeth

Klavs recently took on the Arrow V as his latest project, and the results are very impressive. As Arrow lovers are well aware, there are many different versions of the F-27, and each has slight visual differences. The Armada Arrow is two meters shorter with only a fraction of the mass, which is just the variant you'd want to build at far flung makeshift shipyards. The images below illustrate the differences very nicely. WC3's iteration includes a slightly longer center fuselage and extended engine modules. Even though the forward sections are nearly identical, there are plenty of differences (both in overall textures and underslung gun mounts) that provide a really fun comparison. Don't miss another excerpt from "Me: The Life and Battles of 'Maniac' Marshall" below - does anyone know what happened to the one at the Academy? Hit the Comments link if you do! 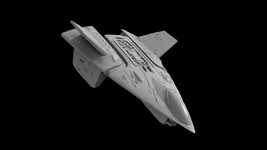 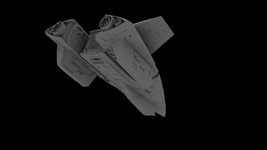 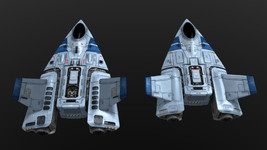 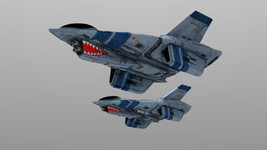 The early Arrows were usually restricted to the dissimilar aggressor/trainer role while the light fighter role was filled by the Hornets. We had an early one at the Academy. I was on the schedule to fly it right before graduation, but it disappeared one day and nobody could tell me where it went. I dunno, maybe somebody crashed it or something.

Eventually they came into their own, getting bigger and bigger reactors to power all the combat shielding and weapons, and the late war version mounted four guns and eight missiles. Before the 'peace' that would have put it in the medium fighter category. They were great though, enough acceleration to tear your face off. In the F-27 you could handle stuff all the way up to a Vaktoth, as long as his buddies were far enough away and you had some missiles left.

Klavs was also asked what a large physical 3D print would cost. As this new technology is still a developing field, prints more than several inches in length can quickly ratchet up in price. The tally for a color 13" model is in the $1200 range! Needless to say, there won't be one made any time in the near future, but based on trends over the last few years, it's safe to say such amazing creations should be feasible someday.

I'm getting the feeling Maniac never met a fighter he didn't like. Note the differences between the Armada Version and the WC3 version. Finally explained that 2 meter length discrepancy!

Used the absolutely gorgeous Saga version as a reference, and did my best to rebuild her and make her my own. I hope I didn't ugly her up too much for you!