With the addition of some recent finishing touches, LOAF has essentially completed Karga the Wing Commander Computer, and he's looking for new challenges. Although there are a few opportunities for Karga expansion later, the next great frontier lies with the Amiga. These teaser shots provide a glimpse into the adventure ahead, and LOAF sets the stage below. Continue the story at the CIC Forums here! 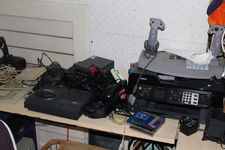 AMIGA! Is there no word more thrilling to the human soul?

If you're reading this and thinking: what the heck is an Amiga? then you're probably... an American! Amigas were available here but they were never more than an also-ran, a distant third or fourth or seventh in the titanic struggle between Macintosh and PC.

If you're reading this and thinking "Amigas, eh? Jolly good." then you are British and know what's going on. The Amiga was HUGE in Europe and England especially, where they were the last desperate strike against having to use the same kind of computer as normal people (you know, along with the BBC Micro and the Sinclair and the Acorn and half a dozen other weird space computers.)

(Finally, if your reaction was: "eh mate, thems a fuzzy wagger" then you are an Australian and should seek help.)

The one exception is in professional video work, where American Amigas found a real niche. Thanks to an invention called the "Video Toaster" (yes, we're all thinking of the After Dark flying toasters right now, just let it happen) the humble Amiga became an unexpected powerhouse in the field of video editing and 3D effects work. In fact, the still-popular LightWave 3D package got its start as software bundled with the Toasters. The quality of a given 1990s TV show can be determined entirely based on whether or not an Amiga was involved in the effects work and editing. SeaQuest? Amiga! Sliders? Amiga! The X-Files? Amiga! Babylon 5? Amiga... okay, so it's not a hard, fast rule.

The Amiga had a graphical interface which I assume without checking was called AmigOS, and was appealing in that period of history before Microsoft decided to just force everyone to use Windows. The line ended in the early 1990s and they were always a little underpowered compared to their PC equivalents... but they were plucky and have a host of fans to this day. Amiga people continue to do insane things to Amigas, much like Wing Commander fans continue to do insane things to Wing Commander. There are even some weirdo modern Amigas made by other companies that may or may not be real.

All well and good, but why does LOAF care? Well I'll tell you, you jerk, I care because there's...

... A PORT OF WING COMMANDER FOR THE AMIGA!

And it never happened.

But you just said it DID happen! Jeez, let me tell the story, internal narrator.