Tarsus Gets Its Guns

It's been a long time since we've seen a classic Wing Commander ship in a WC Pioneer update, so here's the latest on the Tarsus. Weapons and special devices are now detailed on the ship, and its current wireframe is pictured below. The interior of the ship is still in work, but its glowing displays are slightly visible through the front windows. If you missed it before, check out Howard Day's impressive 3D Tarsus cockpit here. The ship looks ready for action to me. The only thing this mainstay of the Exploratory Service needs now it a starfield to fly through. 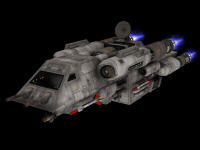 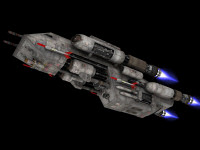 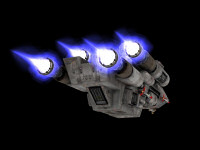 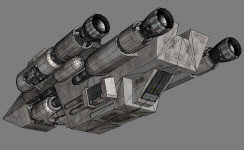 This is a big issue for those interested in the business history of Origin - with company basically inventing the idea of releasing classic games as 'budget' releases which continues to be a huge part of the market to this day! What game started that trend? Wing Commander, of course! There are some other interesting parts, too - like the fact that they hadn't yet settled on a name for Privateer and the announcement of the Origin FX screensaver.

The CD-ROM compilations of Wing Commander II/Ultima Underworld and Wing Commander II Deluxe Edition are just about out the door... Also in August, the sales team launches a bold, new experiment by unleashing Wing Commander and Ultima VI at a suggested retail price of $29.95 (which will probably end up at around $19.95 as a 'street price'). 'The idea,' according to The Big Bulldog, Marten Davies, 'is to get those bargain-hunters who are picking up the low-priced 386 systems right now. They want to build a software library and build it fast. Since there's nothing out there that can really compare to our products in terms of technology, we want those buyers to pick up these games and think, 'Wow, now I know why ORIGIN's newest games cost $50 to $80.' Then we'll have them hooked.' The special price point is for a limited time only (120 days through Christmas), but if sales really start cooking, the offer may be extended... Current plans now call for the top-secret ORIGIN FX Screen Saver to ship by mid-October, rather than the originally-scheduled Aug.-Sept. period, due to additional design modifications suggested by internal test-site staffers. The Bulldogs have big hopes for this one. Then, everything breaks loose in November. Ultima VII, Part 2: The Serpent Isle (make sure you use the entire title), Strike Commander, Underworld 2 (maybe), and Trade Commander/Privateer (one of those names) will all be fighting to get out of QA at about the same time. Add duplication and build time, and you're looking at a holiday beat-the-clock. If all of these products make it, you'll be able to celebrate by taking your computer home for Christmas. You'll have to bring it back, of course, but to the brand new building out on 183.

Point of Origin
Vol. II, No. 22 - July 31, 1992
Contents
A Cast of Several
Raves and Rumors
New SKU Review
On a Roll...
In The Library
Just a Note:
Foreign Trade
Stork Watch
Bio: Sharon Miller
Road Warriors
In, Up & Out
NEWS.TXT