Howard Day has wrapped up the finishing touches on his high quality Drayman model. The final gun tips have been fashioned, and the engines now pulse a reassuring glow. I'd love to see what it would be like to escort one of these things. His models require F-edge and at least Max6 to manipulate. You can grab the 2.5 meg zip here. Some earlier images of the transport are available here. 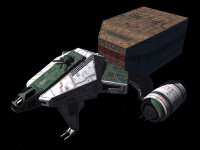 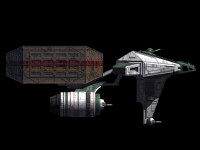 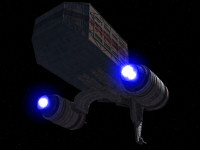 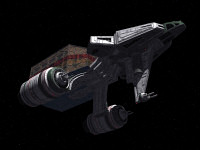 What sort of games did classic game developers play back in the day? akula65 was reading David Kushner's Masters of Doom and came across a fun quote regarding John Carmack and John Romero. On page 82 of the hardback edition, Wing Commander got the following mention.

"(Carmack) had been experimenting with 3-D graphics since making his wire-frame MTV logos on his Apple II. Since then several games had experimented with first-person 3-D points of view. In 1980, Richard Garriott employed this perspective in his very first role-playing game, Akalabeth. Two years later an Apple II game from Sirius Software called Wayout wowed gamers and critics with a first-person maze game. But it was flight simulations, putting the player in the cockpits of a variety of airplanes, that exploited this kind of immersion. In 1990, Richard Garriott's company, Origin, released a space-themed combat flight simulator called Wing Commander, which became a favorite around the id lake house."

Enjoy Our Biggest Year Yet

Over the last weekend we surpassed the traffic tallies from both 2001 and 2002. Earlier this year we beat out 1998 and 2000, and we should pass the 1999 total before the year is half over. We're happy that you're visiting to share our busiest year yet. The dedicated Wing Commander fan community is growing, and we're lucky to have so many people to share our appreciation of the series with. Hopefully you can join us in celebration for our seventh birthday in eight weeks.