Wallpaper With The Majestic 'Claw

Atekimogus has created a wallpaper featuring the TCS Tiger's Claw and its escort traveling by a beautiful blue cloud of some sort. The oldest capital ship design in Wing Commander is still a favorite among modelers and artists. This scene is an evolution of a preliminary model shown off some time ago. The wallpaper is scaled to 1280x1024 and comes in at about half a meg. 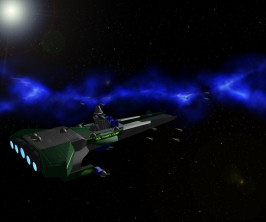 I added a few details to turrets and bridge, played a bit with bump and glowmaps and made this wallpaper. I hope you like it and as always I appreciate your feedback.

You can provide feedback and check out a couple alternate angles of the scene at Crius.net here.

The Wing Commander Galactic Conflict is a role playing group that has recently relaunched itself to take advantage of the recent buzz concerning fan RPGs. WCGC plays out on a set of Forums where characters create interdependent stories with eachother.

What's up with the Confederation Commander?
The Confederation is the primary faction being played in the Game right now. Previous experiences have shown us that when everyone tries to lead, nothing turns out well. This is true in war as well as in role-playing games.

The whole sim is run by the GM, known as the Confederation Commander. He sets mission objectives for our players to carry out. Another GM plays as the Kilrathi against you. Depending on how well you accomplish your objective, you are rewarded or promoted at the end of an assignment.

Check out Crius.net for more information on the game. Visit the WCGC Forums if you'd like to join.

One of the spring's big gaming conferences takes place this week. Slashdot has an article about Raph Koster's keynote comments. The former Privateer Online lead always has an interesting take on game design philosophy.

The console manufacturers are currently recommending 8 hours of gameplay rather than 40. Because people get it already! The brain is trying to optimise the chunks away. Fun is the process of encountering bumps along the way. A new pattern to master. New data thrown into the mix. This is what levels in a shooter should do. They should teach you different data per level. I'm giving you a hammer and I'm going to show you every variety of nail under the sun. This is a "possibility space" and a game is iterating through the possible combinations. The problem is, computers suck at this. This is why, until the advent of the computer, you played games with other people. This is why with the internet space, we’re rushing back to it, to that social play. Other people offer a much more interesting challenge than an algorithm. People introduce a really interesting array of problems into the question.

The GDC seems to be a nonstop schedule of keynote addresses. There'll probably be more interesting ones later in the week. The most recent has EA's John Batter discussing their plan to dig into the mobile phone market very aggressively.