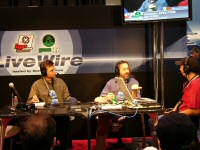 Original Wing Commander music composer The Fatman apparently made an appearance at the Classic Gaming Expo held at E3. I didn't catch him to ask how progress was going on his classic Wing Commander music album, but I did find one of his posters advertising the event. Apparently he is visiting various events to promote his new book, The Fat Man on Game Audio: Tasty Morsels of Sonic Goodness. 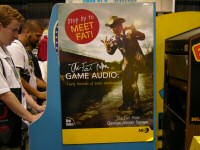