The Y22A-1 Temblor Bomb is a super-weapon produced and fielded by the Terran Confederation. It is a warhead that serves as a planet-killer.

The Y22A-1 Temblor Bomb was designed as a high tectonic-frequency weapon with a 267.5 megaton yield. Its projected aim was to destroy planets by means of triggering earthquakes. It was designed so that if delivered with absolute precision to an active fault line, the resulting sonic waves would be powerful enough to destabilize the tectonic make-up of the planet's surface. The resulting earthquake would spread across the planet and rip the planet apart as its surface was ravaged by the extreme seismic activity. The Temblor Bomb could be deployed on virtually any planet, but it was most effective on worlds with an unusually high level of tectonic instability. It could be fired like a torpedo from heavy fighters whose payload allowed for such valuable cargo.

The Temblor Bomb was first conceived during the Terran-Kilrathi War. During the 2660s, the Terran Confederation actively pursued the research and development of weapons capable of destroying entire planets for use against the Kilrathi Empire. Having seen the massive bloodshed that was occurring throughout the course of the conflict, the Confederation sought a means by which to end the war swiftly, and deduced that the only means by which this could be accomplished was by destroying the Kilrathi home world, Kilrah. As the seat of the Imperial family and the major industrial and military center for the entire Empire, the destruction of Kilrah was hoped to be the killing blow that would ultimate cripple the Empire into capitulation.

Over the course of the decade, the Confederation invested financial and material resources towards the creation of such weapons. Among them was the Temblor Bomb, developed under the supervision of the Special Operations Division by Dr. Philip Severin. The weapon underwent testing for a decade prior to its first use in 2669.

In 2669, Colonel Jeannette Devereaux and her Special Operations team infiltrated Kilrah and conducted scientific research on the planet's tectonic structure. Although Devereaux and her team were eventually discovered and executed for their activities, the Confederation discovered from their work that Kilrah was an extremely unstable planet, making the deployment of the Temblor Bomb against Kilrah a feasible option.

The Temblor Bomb is tested on the uninhabited planet of Hyperion in 2669; the test is a success with the planet being completely destroyed.

Dr. Severin was captured by the Kilrathi and subsequently imprisoned for his scientific knowledge. His capture stalled the Temblor Bomb project, and Special Operations was unable to complete the weapon without his expertise. After the loss of the TCS Behemoth in 2669, Brigadier General James Taggart commissioned the TCS Victory to extract Dr. Severin from a Kilrathi prison planet, Alcor V. Colonel Christopher Blair led the assault on the planet and enabled a squad of Terran Space Marines to land and rescue Dr. Severin, allowing the project to resume.

Soon afterwards, a fully-functional prototype of the Temblor Bomb was delivered to the Victory for testing. A suitable test site was then found in the Hyperion System, where a barren and uninhabited planet with a high level of tectonic instability was found. On 2669.262, Colonel Blair deployed the Temblor Bomb to the planet's surface in a F-103 Excalibur that had been specially configured to carry its payload. After evading the Kilrathi patrols, Blair deployed the Temblor Bomb into the target fault line. The resulting detonation triggered a cataclysmic shock wave that destabilized the planet's tectonic make-up, destroying it completely.

With the success of the Temblor Bomb test at Hyperion, the Terran Confederation immediately co-ordinated plans for a strike on Kilrah, with the Vega Sector Headquarters giving full approval to General Taggart to carry out the strike. Covert Ops secreted two Temblor Bombs into the Kilrah System, where they had previously established hidden refueling outposts in the nearby asteroid belts. The TCS Eagle carried out the initial strike against Kilrah with General Taggart co-ordinating the attack, only to be driven back after meeting heavy resistance.

Some time later, a wing of Excaliburs were delivered to the Victory. Gold Squadron and Colonel Blair's wing was charged with delivering the Temblor Bomb to Kilrah's surface. Their timing was ideal as it was discovered that a large portion of the Kilrathi fleet was amassing in Kilrah orbit, preparing for a strike against Earth.

A flight of four Excaliburs were deployed to deliver the Temblor Bomb to Kilrah's surface in an effort to destroy the planet, code-named Lancelot Flight. This flight was led by Colonel Blair, with wingmen Winston "Vagabond" Chang, Robin "Flint" Peters, and Todd "Maniac" Marshall. The flight launched from the Victory in the Freya System and jumped into Kilrah, where they fought their way through heavy enemy defenses. After refueling at covert depots set-up by Special Operations, the team acquired the Temblor Bomb and loaded it on Blair's specially-modified craft. Only Blair reached Kilrah orbit as his entire wing ultimately fell to enemy fire. Blair descended to the planet's surface where he skimmed along the planet's vast trenches until he delivered the Temblor Bomb to the targeted fault line, sealing the fate of Kilrah. 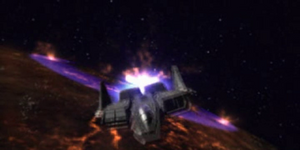 The Temblor Bomb detonates on Kilrah, initiating the destruction of the planet and with it, the dominance of the Kilrathi Empire.

The Temblor Bomb detonated, destabilizing Kilrah's volatile tectonic structure. The planet was rocked by a cataclysmic earthquake that completely destroyed the planet's surface, killing billions of Kilrathi and their Emperor. In orbit, massive shock waves of energy emitted by the blast swept through the Kilrathi fleet, destroying dozens of warships and forcing the survivors to flee. Finally, Kilrah was destroyed in a massive explosion that consumed itself, its two moons, and all Kilrathi within the planet's vicinity. With the destruction of Kilrah, the Terran-Kilrathi War was finally ended.