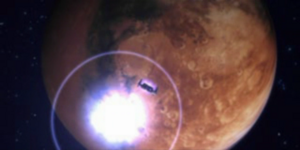 Colonel Blair deploys the Temblor Bomb on Hyperion, which results in the planet's total destruction.

Hyperion was a planet in the Hyperion System. It was a desert world with numerous trenches and canyons, and almost devoid of life. It was unpopulated by either the Kilrathi or the Terrans, primarily due to its tectonic instability.

Hyperion became the testing ground for the Temblor Bomb in 2669 during the final weeks of the Terran-Kilrathi War. The Temblor Bomb was to be used to destroy Kilrah, but had to be tested for effectiveness before this could be done. During the Battle of Freya, the TCS Victory relocated to Hyperion to test the weapon on the planet Hyperion, as its tectonic instability would play to the T-Bomb's strengths. Colonel Christopher Blair was selected to deliver the weapon.

Blair fought his way past the Kilrathi patrols in Hyperion and then descended to Hyperion's surface, where he deployed the weapon along the pre-selected faultline. The resulting shockwave of energy destabilized the planet's tectonic structure, destroying it completely. The success of the test prompted the Terran Confederation to organize an immediate strike on Kilrah.