Welcome to the Current Events Annual archives―"the chronicles and abstracts of our time."

If you are new to these archives and require assistance, request help.

History of the Terran- Kilrathi War

The Terran Confederation and the Kilrathi Empire first came into contact on 2638.229, and conflict ensued immediately. On 2641.009, Confed formally declared war. From that day to the present, conflict has continued unabated, and the Kilrathi have uniformly refused any offers of cease-fire, truce or negotiation. At present, neither side possesses any clear-cut strategic advantage, and there are no signs of any abatement of aggression.

The Kilrathi are a race of sentient, space-faring non-humanoid bipeds. They represent the first space-faring, non-human civilization encountered by humanity. The first recorded contact with the Kilrathi was made on 2638.229, when the exploratory vessel CS lason encountered three armed Kilrathi merchantmen. Upon being haled by the Iason, the Kilrathi vessels opened fire and destroyed that ship. From that time to the present, a state of uninterrupted hostility has existed between Confed and the Kilrathi Empire.

The Kilrathi rule an Empire of unknown size, probably consisting of 300 to 500 inhabited systems. Kilrathi space abuts Vega and Gemini sectors, while Epsilon sector is roughly divided between systems colonized by humanity and those originally settled by the Kilrathi.

The Kilrathi are believed to have evolved from carnivorous pack- hunters, resulting in their belligerent and expansionistic territoriality. Kilrah, the capital of their Empire, is believed to also be the birthplace of the race. The Kilrathi Emperor is the hereditary leader of whichever noble clan is currently in power. The power of a sitting Emperor is legally absolute; however the Emperor's power or policies may be challenged by another clan, an action leading to vendetta. Such conflicts usually take the form of all-out civil war, with the throne staying with or going to the winner. Inter-clan challenge is also a common route of imperial succession. The current Emperor is believed to have taken the throne in 2632―a remarkably long contiguous reign without civil warfare. It is probable that the ongoing military aggression against the Confederation has served to stabilize the clans behind the current ruler.

There is evidence to suggest that Kilrathi star travel technology did not originate with the Kilrathi themselves, but may have been acquired from some other, unknown race. The question of the origin of Kilrathi technology must ultimately remain open until such time as humanity gains access to the Kilrathi's own historical record.

BACK TO HISTORY OF TERRAN-KILRATHI WAR

Following the Iason incident, Confed interdicted all non-military exploratory, trade and colonization activity beyond the Vega sector frontier. At the same time they began a coordinated covert scouting operation to determine the extent of Kilrathi dominion. By the end of '38, Confed analysts had determined that the Kilrathi sphere of influence was at least equal to, and possibly greater than, that of humanity. Four separate envoys (under heavy escort) were sent into Kilrathi space in an attempt to at least open up lines of communication, but all such efforts were met by armed aggression. (All four missions were able to retreat under fire back to Confed space.)

At the same time, the Kilrathi were probing Confed defenses. There is evidence of covert scouting analogous to Confed operations, but most of the contacts in this period consisted of pirate attacks on Confed shipping. A significant breakthrough occurred on 2638.348, when a CSF patrol at Masa surprised a Kilrathi corvette in the act of looting a free trader. Because most of the Kilrathi crew was aboard the Confed vessel when the patrol attacked, the corvette was taken with only minimal damage. Although the Kilrathi privateers were all killed in the fighting, the corvette provided a wealth of important intelligence, including the best data yet on the total radius of Kilrathi space, inhabited Kilrathi colonies near Confed space, and multiple new jump- routes within Kilrathi space.

The conflict escalated on 2639.006, when a Kilrathi carrier group attacked and destroyed the agricultural colony on Hellespont, an unarmed settlement of assimilated Pilgrims. 82,000 humans were either killed or enslaved in that attack. About 12 hours later, a similar force attacked the shipping port of Tartarus, but that colony was able to hold out until reinforcements arrived from Brimstone Naval Station, and the Kilrathi withdrew after 48 hours of heavy fighting. On 2639.007 less than eight hours after news of the attacks reached Terra the Confederation Senate passed a formal declaration of war against Kilrah. 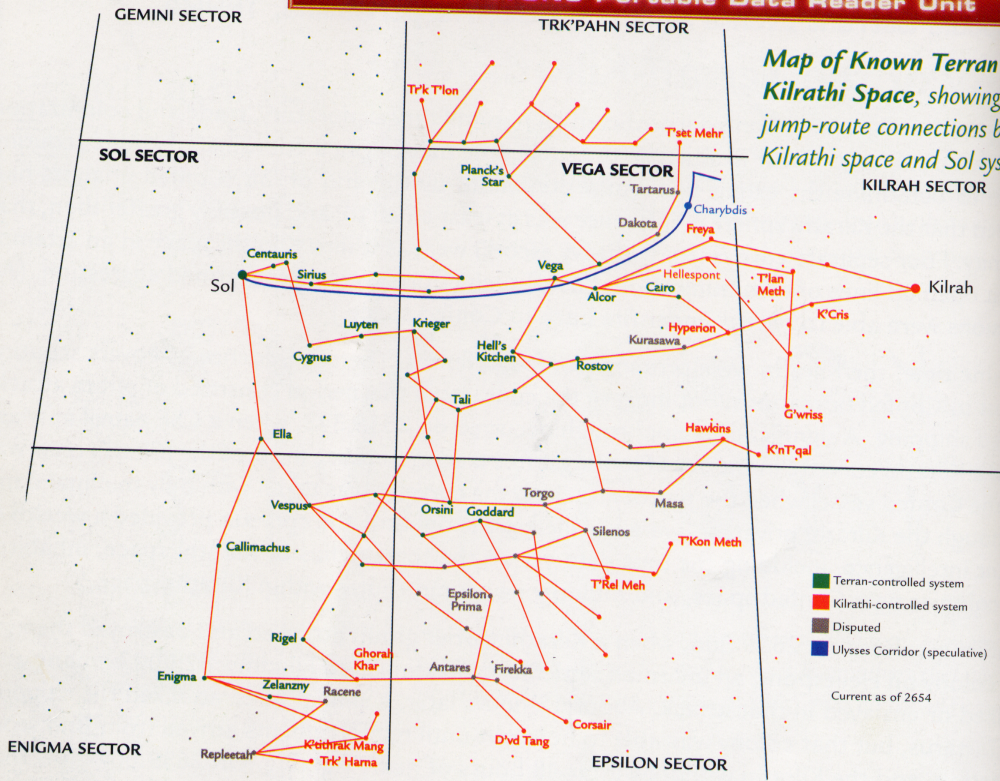 The escalation of hostilities did not catch Confed totally by surprise, and within a week they were able to launch a punitive counter offensive centered on the K'nT'qal system. Kilrathi defenses held, but the action provided time to fully implement wartime defenses on all border colonies, using ships originally built for the two Grand Fleets of the Pilgrim war.

In the decade and more that has passed since the beginning of the Kilrathi war, the battle lines have shifted remarkably little. Between 2640.160 and .200, the Kilrathi launched a major assault that resulted in a temporary Confed withdrawal from about 30% of our systems in Vega, but a Confed counter offensive retook nearly all the lost colonies, between 2640.220 and .340. In late 2644 the Kilrathi repulsed a Confed attempt to bring all of Epsilon sector under its control. T'Kon Meth and T'Rel Meh fell after heavy fighting, but the invasion effort stalled there. A Kilrathi counter offensive in 2646 took both worlds back, and led directly to the Battle of Repleetah, the longest (2646.080-2651.290) and bloodiest battle of the war. When the Kilrathi finally withdrew from Repleetah, it was estimated that Confed had lost more than 2.7 million troops (in addition to 1.2 million civilians lost in the early phases of the battle), while Kilrathi losses are estimated at upwards of 7 million.

In '49 the Terrans launched the last major offensive in the war to date, an all-out assault on G'wriss. Terran ground troops established a beachhead, but stronger-than-expected space defenses wiped out most of the invasion's space support. An emergency relief group was launched to evacuate the ground forces and bring them back to Confed space. The carrier CS Tiger Claw spearheaded the relief operation, fighting a grueling three-day delaying action which resulted in the death of more than half her fighter pilots. This action has become known in popular reports as “Custer's Carnival.”

Since Custer's Carnival, Confed's strategy has been one of all-out defense to allow the more aggressive Kilrathi to hurl themselves into battle at a disadvantage. Kilrathi casualties have been astronomical; however, to date the Empire appears undeterred. Confed analysts speculate that more-or-less continual warfare is a long-established bedrock of the Kilrathi society and economy, and that the Kilrathi are not expending a catastrophically larger percentage of warriors in the ongoing war with Confed than they would have lost in inter-clan warfare in an equivalent time frame. In the last few years of the conflict, however, Kilrathi aggressive attacks have declined precipitously, but with no corresponding decline in defenses or increased willingness to negotiate.

Confed strategists have warned that it is probable that the Emperor has succeeded in unifying the clans to the point where he can withdraw and amass forces for an invasion effort of unprecedented scale. In the face of this foreboding likelihood, Confed is left with little choice but to double and re-double their defenses along the border, and hope that when the hammer finally descends, it will break on the stone.