The Destroyer Ship ML4D ("Salvia") is the standard military destroyer of the CIS. They are the largest CIS capital ship routinely sent on space patrol, engaging the numerous pirate fighters which prey on hapless merchants. Their aggressiveness, firepower and ubiquity makes them a frequent target of coordinated pirate operations, and many Salvia have been captured. The ML4D carries a small fighter complement.

Messineo Couriers uses a Salvia as a defensive cruiser. Notable Salvia include the CIS Aggressor and the CIS Lilliana. 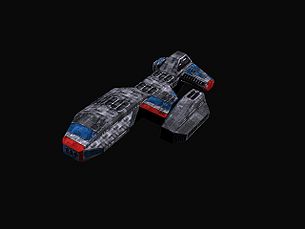 Military destroyer without colour palette applied, as rendered from the P2 Archive.

1. As depicted in internal models for Privateer 2: The Darkening.