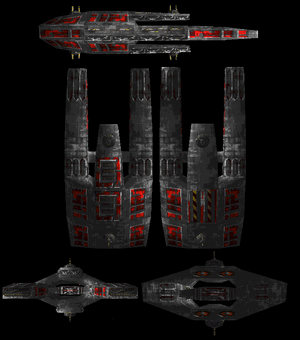 The CR2a ties the heavier PR6a in terms of number of guns, making it the second most effective pirate cruiser in the Tri-System. The Kiowan pirate clan uses the CR2A for many missions. CR2Aes serve together in greater numbers than any other pirate capital ship: during one operation against Davis & Co. Arms & Supplies, five of the ships worked in tandem. Because of the close relationship between Kiowans and the Kindred, Kiowa are often dispatched in important assassination missions: a pair was deployed to kill Rhinehart, and four were sent to silence Ronula Smitts. Their primary service, however, is in the clan’s ongoing conflict with the Papogods. Following an abortive peace talk, a single Papogod cruiser engaged a pair of CR2Aes. It managed to destroy one before it was felled by the Peltier XVI. The Kiowan clan officially classifies the ships as carriers due to their ability to launch fighters.