EGM's 1UP gaming website has written a small article about the EA Replay announcement that introduces more questions than it answers, but hopefully we can clear up a few things right here. They list "Wing Commander 2" instead of "Wing Commander: Secret Missions," which appears to just be an error. The Secret Missions for Super Nintendo was mistakenly referred to as "Wing Commander 2" occasionally in the mid 1990s, and the unreleased SNES WC2 would have been a very different game. 1UP received no official word on the compilation by EA, so it seems that they're incorrectly reposting the information from GameStop's product listing. They also posted this unusual update:

Electronic Arts didn't exactly deny this collection is in-the-works to 1UP, they simply told us "EA has not officially announced any new PSP titles." Take that for what you will, but given the description (which has now been pulled dowm from GameStop), we're inclined to call this a PR blunder.

EA doesn't comment on unannounced titles, so their response is to be expected. Since the item wasn't even pulled off the GameStop site, we're not sure what they're talking about. Other sites are starting to list the EA Replay in their catalogs as well, so we're probably mere days or weeks away from an official Electronic Arts kick off for this. 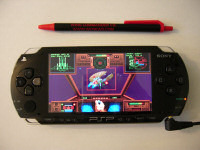