These two articles are the follow-up to Vance's features last week. The left column investigates the nature of Wing Commander 4's live action shoot. They're pretty excited that the production quality is similar to what you would expect from a regular theatrical movie. 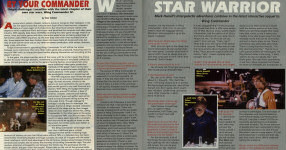 Though videogame footage is usually shot on videotape, the powers that be at Origin decided instead to pull out all the stops and lay their images down on more expensive 35mm film. The result is a space opera epic with a cinematic feel that would be equally at home on the big screen, but comes across even better as an interactive game.

Most of the spread is taken up by a big interview with Mark Hamill. Hearing the actors talk about the games is always fun.

Do you feel your fans have been a little overzealous in their desire to see you in space hero-type roles?
They say that people who are really into science fiction are strange, but to me, I think how wonderful it is for them to be so in touch with the fantasy portion of their lives... The stereotype of the computer nerd must be based on some kind of reality, but having done Wing III, I see that it doesn't fit the airline pilots and secretaries and people who work in banks. The broad spectrum of people who have responded to Wing Commander proves to me that it's just like when I was on a sop opera - it's not just housewives in curlers and pink slippers that watch them. We're underestimating the autdience.

There's also a neat question where they ask him about the possibility of a cameo in the Wing Commander Movie. Hamill went on to play the uncredited role of Merlin in the film.