Vance caught our recent Sci Fi Universe's "Making of Wing Commander 3" article post and was able to dig up the sequel. He was a subscriber ten years ago and scanned the July 1995 issue with Wing Commander 3's full review. The game received a 91% overall score. It actually lost a few points on the story, but I guess they had to balance it somehow. He also found an article from a later issue that had some insight into Wing Commander 4's production and the series' role in general science fiction. 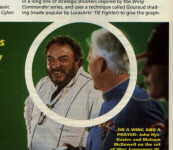 The downside to Wing Commander III is that you will need a minimum of a 486-66 with 8 megabytes of RAM and a double-speed CD-ROM, but a Pentium with 16 megabytes of RAM is strongly recommended to be able to play in SVGA mode, which is a terrific enhancement over standard VGA... But Wing Commander III, with its bold mix of great acting and superior game play, is definitely worth the trouble. Cat-nipping was never so much fun.

If you want to recapture the magic of playing WC3 on a 486, just try firing it up in DOSBox with a modern computer running at less than 2 GHz. Long load times and jumpy controls are possible once again.

The Wing Commander series from Origin has one of the most well-established interplanetary struggles in the world of electronic gaming. It concerns the ongoing war between the human Confederation fleet and the aggressive, feline Kilrathi (imagine the cowardly lion with his newfound courage and an arsenal of space-age weaponry). The Wing Commander series, which has been around for five years, provides a perfect example of the evolution in sci-fi gaming.

Starting out as a typical space shoot-'em-up, the series has become one of the most sophisticated examples of interactive entertainment and has inspired a flourishing genre of its own.