WC vs History: Takes More Than That To Make A Wake

The CVE class had been a source of intense debate back in the Concordia's pilot ready room. This new class of ships was a rush job to try and plug the gaps after the heavy losses of the last campaign. Nine transport ships, already three quarters completed, were pulled out of the transport assembly stations and converted into escort carriers; and a single look at her convinced Jason of the folly of the whole damn thing.

If Captain Bondarevsky had been looking at an American escort or light carrier from the Second World War, his thoughts probably wouldn't have been much different. Escort carriers, in particular, were the type of ship only a parent could love. In both the real world and Wing Commander, escort carriers were stop-gap measures when larger fleet carriers were in short supply. The Wing Commander version actually combines the history of the escort carrier with that of another class of ship, the Independence-class light carrier, to create the background for the Wake-class. 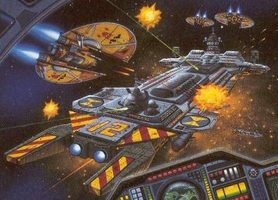 2666 was a bad year for the Confederation. A large number of fleet carriers were lost in engagements with the Kilrathi and replacements were still a ways off. The Confederation needed something to fill the gaps in their carrier forces until those new ships came online. The solution was the Wake-class escort carrier. Nine medium transport hulls were taken off the assembly line and prepared for conversion to escort carriers capable of carrying 45 fighters. Along with creating a flight deck and hangar area, the conversion also replaced the old transport engines with those from Gilgamesh-class destroyers for added performance and mounted a number of turrets to improve defenses.

The CVEs were designed with four roles in mind:

Three of the above roles are the same as those for their real world cousins. High risk deep penetration raids were not something escort carriers were used for during the Second World War. Along with almost no armored protection, they were far too slow, with a top speed of only 20 knots compared to the 32+ knots for the larger carriers, to undertake such operations. They would have had a hard time surviving any kind of raid, but especially one requiring speed. There were some wartime proposals, mostly from Admiral John H. Towers (Deputy Commander-in-Chief, Pacific Fleet), to conduct deep carriers raids against Japan in early 1944 before the American offensives brought them to the doorstep of Japan in 1945. For the Wake-class, it was that fourth reason that made them famous. First with the TCS Tarawa's raid on Kilrah in 2667 which not only caused the destruction of numerous ships under construction but also aided the Confederation's victory at the Battle of Vukar Tag. It was followed by subsequent raids by the TCS Enigma and Khorsan into the Kilrathi rear that did so much damage the Kilrathi were driven to call for a truce. 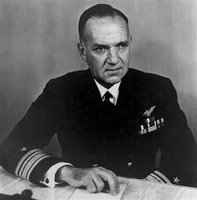 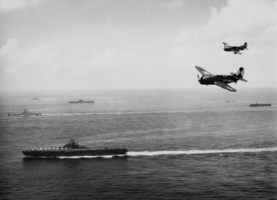 Admiral Towers pushed for deep raids against Japan in 1944.

The United States faced a similar lack of carriers before the Second World War. A year and a half before Pearl Harbor, the United States passed the Two-Ocean Navy Act in July 1940. This legislation called for a 70% increase in the size of the US fleet. However, even though it was passed 18 months before the United States joined the war, the first fleet carriers built under the law wouldn't reach the Navy until 1944 (wartime production increases had them start to arrive in 1943). While not a major concern in July 1940, it became one on December 7, 1941 when war came to the United States. On that day, the US Navy possessed seven fleet carriers (the Langley had been converted to a seaplane carrier). Of them, six were suitable for operations in the Pacific. The USS Ranger (CV-4) was not due to defects in its design and low top speed. The Navy needed carriers, but where to find them? The answer lied with the former Assistant Secretary of the Navy under President Wilson, now-President Franklin Delano Roosevelt.

President Roosevelt proposed both types of ships that came together to help the war effort and provide the background for our beloved Wake-class. The first, the escort carrier, was proposed in October 1940. Escort carriers often get overlooked in favor of the larger carriers. And yet, out of the 151 carriers the United States built during the Second World War, 122 of them were escort carriers. America's first escort carrier, the USS Long Island (CVE-1) was commissioned six months before Pearl Harbor in June 1941. She had been laid down as a cargo liner in 1939 but was acquired by the US Navy before being completed. She was then converted into an aircraft carrier. Experiments were conducted on her to show the feasibility of converting further cargo ships into carriers. They proved that such operations could be undertaken and provided an important foundation of experience for later escort carriers. 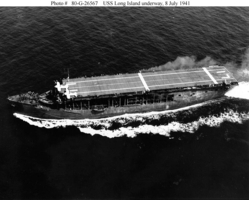 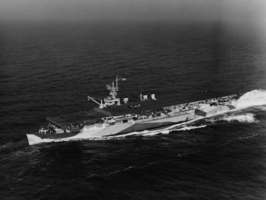 The other type was the Independence-class light carrier. Believing American entry into the war was imminent, President Roosevelt proposed converting cruisers then under construction into light aircraft carriers in August 1941. The Navy, at first, rebuffed the president and said the conversions would not be successful. But, the president was not to be put off and asked the Navy to look into the issue more. Then December 7th happened and the Navy quickly took up the cause. 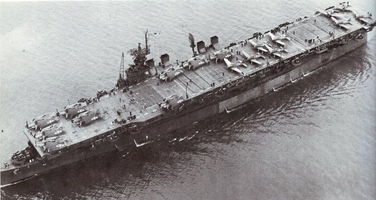 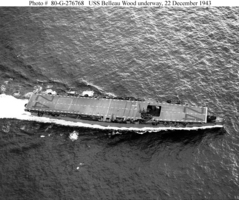 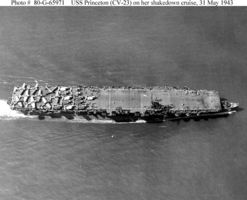 Nine 10,000 ton Cleveland-class light cruisers were reordered for conversion into what became the Independence-class light carriers. Despite early misgivings by the Navy, these carriers proved their value throughout their wartime service. Displacing 11,000 tons (about a third of the Essex class), capable of making 31.5 knots, and carrying just over 30 aircraft, the Independence-class worked alongside their larger brothers throughout the latter half of the Second World War. Only one, the USS Princeton (CVL-23) was lost to enemy action during the Battle of Leyte Gulf in October 1944. 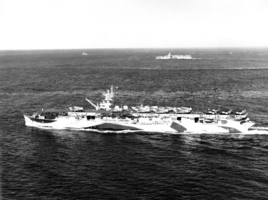 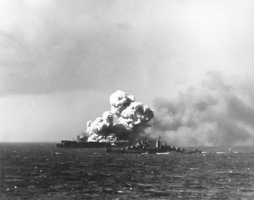 While exploring the real history behind the Wake-class, I came across this quote from a pilot who served on the USS Cabot (CVL-28) which fits nicely with Bondarevsky's first impression quote and his thoughts after returning from Kilrah with the TCS Tarawa. I especially like that last line as Wingnuts are certainly familiar with the sight of two runways on a carrier.

At that time, I had not operated from an Essex-class carrier, so to me it was routine to operate off a smaller CVL. The deck was much narrower. You had to be lined up coming in; there was no way to be off center and make your landing...but the width was certainly much less on a CVL, since a CVL was built on a cruiser hull. With all that flight deck added on top of it, it had a tendency to roll much more than the Essex-class, so in rough seas, you were fighting a pitching and rolling deck.

The operations were different in that, since we were a smaller unit, the air group knew the shipboard people, whereas on the Essex you could be there for a year and not know the first lieutenant. But, in our case, it just seemed that you knew you were more of a family-type affair than aboard the larger ships; the camaraderie was much better, I thought, than on the Essex-class. Other than that, a CVL pilot was always a CVL pilot; they were proud of it. A CVL pilot would come in on an Essex-class carrier and would ask which runway to use-just to put the needle into them, you know. "Right or left runway? Which one?" 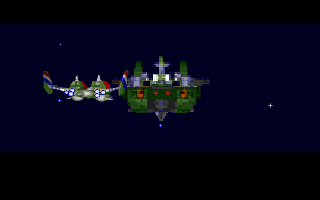