We're wrapping up the year with a look back at yet another productive month for capi's WC RPG. He's made steady gains on several scenario chapters that set up the backstory for the Elegy of Sivar expansion. These take quite a bit of creativity to weave together and make for some interesting fan fiction in their own right. Just in time for the holiday season, he's also crafted a Christmas Kilrathi translation based on the language rules for the project. Last, but not least, he's come up with a prototype game board tile set. He'd appreciate some feedback on this. The example below is a kat flight deck mocked up for a scenario in the game. Let him know what you think! 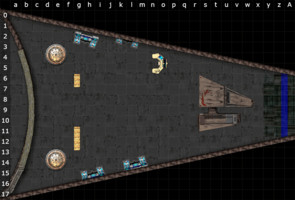 This morning I was building an encounter map for the first Elegy mission using an online dungeon maker tool at pyromancers.com. It's a pretty slick little deal, especially for an online tool. Made this with it (and with a little bit of work in MS Paint):

Anyway, it occurred to me that I could be making a whole bunch of maps like these for Elegy, and that a fair number of them would be for locales of Kilrathi origin. I got to wondering - has anybody ever done an RPG tile set for a Kilrathi setting before? And if not, what kinds of objects do y'all think should be in one? What would one look like, stylistically?

The image above, incidentally, is supposed to be the flight deck of the Kilrathi Star Post at T'kon H'hra - you can see a Naktarg shuttle prepped and ready for launch there (the bit I did in MS Paint). The point of the encounter is to get from the entrance (around tile b16) to the shuttle's door (around tile r7) without getting caught by husuTerran'hra in the bay. This would've been a good spot to have had a Kilrathi tile set - I was limited by what was available. I would've preferred more of a brick red flooring and wall set.

Anyways, thoughts? Anybody out there have experience with building tile sets?