Try Not To Drool Over This Fake Wing Commander Mockup...

This is not a real product, but we sure wish it was! Fakes Forge creates imaginary collector’s editions of games that don’t exist but sure ought to. The box cover merges Blair’s face from WC4 with the Star Citizen Bengal class carrier. It comes with an imaginary Saitek X52 and classic blueprints. Even Klavs’ Raptor makes an appearance! There’s lots of tiny little details that make it evident that the artist really knows their Wing Commander! 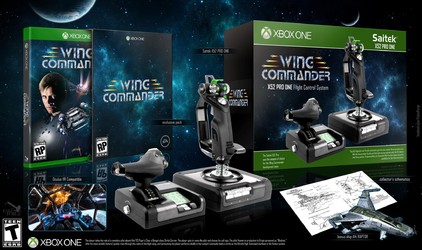 The player takes the role of a nameless pilot aboard the TCS Tiger's Claw, a Bengal-class Strike Carrier. The player gets to name the pilot and chose his callsign. The pilot (known in-production to Origin personnel as "Bluehair" after his most notable feature) quickly rises through the ranks of the flight wing, and (presuming the player performs ideally in the cockpit) eventually leads a strike on the Kilrathi High Command starbase in the Venice System.