Klavs is back with some very nice enhancements to his Wake class escort carrier. We first saw the ship last month with a great comparison that showed off its large transport freighter origins. Today's version is significantly more polished with smoothly refined hull plate lines and a lot more detail. There's also a new mockup of the crammed flight deck and an exterior lineup with the larger Bengal class carrier and a smaller destroyer. The bonus fiction is a recollection from End Run's famous flight deck officer, Lyford Beverage. 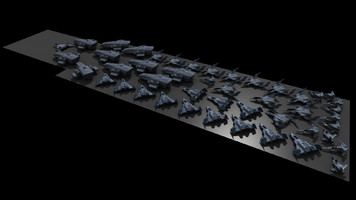 The first [Landing Craft] came in BACKWARDS, punching down hard skidding haphazardly towards the safety barrier and my lines of precious spacecraft. It was still moving as the ramp came down and HE came out. Merritt locked eyes with me and was tucked underneath my chin in a heartbeat, grabbing my vest and pulling me down so he could shout into my ear.

"MAKE ROOM, SON! I GOT NINE MORE COMIN' IN RIGHT BEHIND ME!"

Holy hell. I have never moved so fast in my life to get things respotted. I don't know how we did it so fast, but we got all the LC's aboard with about five centimeters to spare. By the time we were done, The Marines were already setting up camp underneath the wings of the fighters. The hangar deck smelled like a barbecue.

At some point, someone had called 'Skee down to the launch bay. Not knowing what to do, we all stood by and waited for the fireworks.