sndwv is quite a 3D printing connoisseur, and he's recently tried some of the older flavors of Wing Commander models in existence. He's got two new ships to show for it: the BWS Intrepid and a Dralthi model by Astro Commander via the Dream Foundry. These models are smaller than some of the more recent ones we've seen, and they're also monochrome, but they have a striking amount of detail. They're also perfect for tabletop gaming.

For your entertainment, a pic of Dream Foundry's 'Spork', a nice rendition of a Durango-class carrier that just arrived, done up in 'regular' stainless steel. Quite nice, if I say so myself!

Also, I gave Shapeways' new material, gold plated brass, a go with one of Dream Foundry's Dralthi's. Do check out the picture! Detail is great (this is a really small model!) and it is reasonably affordable. Anyone looking for some Bling Commander: 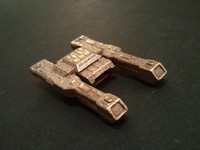 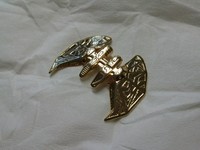 sndwv also has great news in regards to Shapeways' recent issues with Klavs' color 3D prints! I'll let him fill you in:

I [sent] Shapeways an e-mail politely asking them to reconsider. I have become quite a frequent customer there, almost exclusively via Klavs' models and all (except one) have printed perfectly and shipped ahead of time.

First of all, Shapeways decided to print Klavs' models after all, and fortunately they turned out fine- which means they'll remain available for everyone to order!