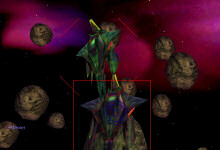 CIC Birthday Party prize winners who submitted their addresses should have gotten a confirmation email from us by now. If you haven't seen one, your email probably got caught in a spam filter and you should resend it or drop by IRC. With most of the CIC Staff out adventuring together for the next couple weeks, a number of these packages won't ship until later September. Here's a list of the prizes and winners again.