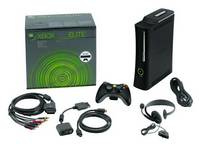 Though we hate to be the bearers of bad news, GameSpot and IGN have posted very negative reviews of Wing Commander Arena. This is all especially puzzling given that both sites each positively reviewed the same build pre-release not once but twice each. (GameSpot, GameSpot, IGN, IGN). GameSpot says:

While the concept of a 16-player arcadelike space shooter is definitely a good one, the various aspects of Wing Commander Arena come together in a very jejune way, leaving behind a husk of a game that doesn't have enough variety or thrills to keep you excited for more than one or two matches. Give the demo a spin if you're innately curious, but you're probably better off not wasting your money on this one.

Some of these comments are especially odd - a lack of variety? I'd wager Arena's eighteen ships, dozen modes and countless weapons against... well, any other game on XBLA. It seems like they're reviewing the game as though it were a full scale DVD release rather than something on the level of Feeding Frenzy and Cloning Clyde. IGN was similarly negative, complaining primarily that the game was too confusing for casual players. While that's possible, they go to some incorrect extremes to make that claim:

The list of missing features one normally expects in competitive multiplayer games goes on. There's no way to tell how many players are participating in a game. You can't set any match options like time limit, number of bots, difficulty of bots, items, weapons… All the things you would normally expect to be able to do in a competitive multiplayer game, you can't. Melee mode is timed but it doesn't tell you for how long (it's 10 minutes -- and you can't change that). When you join a Deathmatch game you aren't told what number of kills you're playing to, so games just go on and on with no end in sight. Games need to set a goal for players to work towards, otherwise you're just aimlessly -- well, playing Wing Commander Arena.

Obviously, I'd like to believe that reviews are bad because of general incompetance... and there's some cold comfort here: nearly all of the 'missing' information IGN claims cripples the game can be found by clicking on the 'start' and 'back' buttons while in flight.

XBOX-360.FR has posted a third review, which is generally positive (and en francais). They found some gameplay elements awkward, but also believe it to be the most ambitious Xbox Live Arcade title ever made for a variety of reasons... and they hope for a sequel!

There are plenty of consoling quotes about why bad reviews don't matter, but in this case they probably do - every person who opts not to buy Arena because of a poorly constructed review means we're another leap further away from Wing Commander 6. We recommend that everyone post their own thoughts, as both IGN and GameSpot allow users to rate titles themselves (and, in fact, both sites' reader ratings are currently significantly higher than the professional rating). 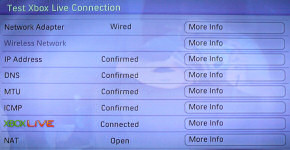 There have been reports of difficulties connecting to Arena multiplayer games. The user will see a message that says unable to connect to game before being dropped back to the menu. This happens when the Xbox 360 is behind a router and the necessary ports are not being forwarded. AD found us instructions for identifying and fixing this issue. The whole process should only take a few minutes.

To find out if you're affected, turn on your Xbox 360 and load up the Dashboard. Navigate to the System blade, select Network Settings and test your Xbox Live Connection. Some of the steps can take a few seconds to complete. The results are meant to look like this:

The NAT item is especially important. If this says RESTRICTED or MODERATE instead of OPEN, you will need to configure your router and Xbox for online gaming. Tom McCann's website has easy to follow, illustrated instructions for D-Link and Linksys devices and walks you through all the steps on the Xbox. In addition to all that, Frosty had to disable the UPNP option to get everything working right. If you own a different brand router, the process should be very similar. You can also ask other Wingnuts for help on our Forums.

If your NAT is open you should have less trouble connecting to games. However, if another user in the game has a restricted NAT, you may not be able to connect all the same.