This Presentation Is Spot On

Matt Clothier has a great Wing Commander Arena story for us: GameSpot's weekly video show, On the Spot, included a presentation about Arena! In the process they managed to reveal the last unknown player ship: it's the Darket Dragonfly! You can download the entire presentation here or stream it here. The Arena material, also extracted below for your convenience, begins around the 1h03m mark. 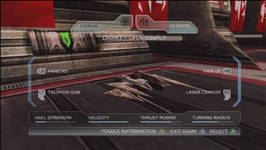 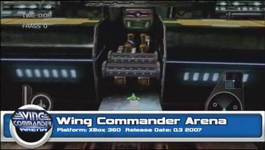 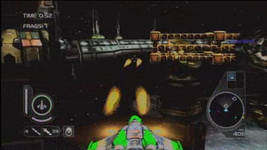 And for those who aren't video-inclined, here's a transcript:

Jeff: And finally he's back in video game form with Wing Commander.

Rich: Not even kind of?

Jeff: No, not even kind of. Wing Commander Arena is an Xbox Live Arcade game that's coming soon, and this aint the Wing Commander that you are thinking of, essentially. Though it does have a lot of what you'd expect a Wing Commander game to have. There's Kilrathi ships, also the Earth forces. We'll pick an Earth ship and get right in. Now look at that! It is like a top down kind of shooter game and it's primarily focused for multiplayer action. Now this... it'll have sixteen player support when it does come out, but we're in a match with bots right now, which will not be the most exciting thing in the world, but we can get in here and fly around and do some stuff. Multiple weapons and basically you just kind of fly around and shoot stuff. There's a few different modes. There's one where each side has a capital ship you're trying to take out.

Rich: These bots are pretty good. I can see this game getting pretty hectic with sixteen players all yelling at eachother and playing this game.

Jeff: Yeah, and with team based stuff and the right stick will do your little evasive maneuvers, you flip around and dodge shots. You can actually, you can change the camera perspective here if you want a different look at the action, but none of them are going to give that first person kind of Wing Commandery feel that the original had. This is a very much different game which, you know, if you're the sort of person who's been expecting a new Wing Commander game for years and years you might be a little angry. But it's actually pretty cool.

Rich: Maybe there'll be enough clamor over this that then they'll make a new Wing Commander game. Mark Hamill is available.

Jeff: Mark Hamill, yeah, Mark Hamill not doing much. Tom F. Wilson, he can still do the, he can still say "chalk up another one for the Maniac". He can do that. Drop of a hat he's showing up to say that for you.

Jeff: Yeah, all really awesome. You have afterburners here, if you click in both sticks you get a little boost. Little powerups to pick up that'll restore your gun efficiency and you know, repair your engines if you afterburn too much. And yeah, it's just a fun little action packed multiplayer shooter. And it's surprisingly exciting, you know, for what looks l ike a pretty simple game.

Ryan: How much is it going to cost asks {someone} from Finand.

Jeff: I don't believe EA has announced a price for the game, but I'd say it's a pretty safe bet that it's going to end up being 800 points. That seems like pretty much the base level maximum for originally developed content for Xbox Live Arcade and for the Playstation 3 is that 800 point $10 mark.

Jeff: Oh, you know how this Xbox Live Arcade stuff is. We don't know.

Rich: It could show up tomorrow!

Rich: It looks like it could be a lot of fun.

Take special note of those bots -- Fireclaw is flying a Darket, Lone Wolf is flying a Rapier... awesome stuff.