Today we've got a new scan previewing the release of The Secret Missions on the Super Nintendo. AD found it in the November 1993 issue of Super Action. I love how colorful and exciting everything looks. We get plenty of screenshots of spaceflight, life aboard the Claw and of the special new War Hammer XII cutscene added to the game. The images repeat film-reel style across to top to sell how cinematic something like this was considered at the time. As was also common back then, there are also some basic tips for how to approach the different types of missions. You heard it here first: "a lot more technical," "big improvements all around" and "a lot more depth than the original!" 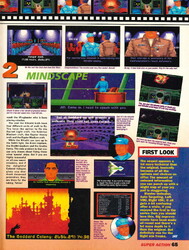 Note that the game is occasionally referred to as the sequel, "Wing Commander 2," since it's the second (and standalone!) Wing Commander game for the Super Nintendo. But it's the same core game as the first WC1 expansion. SNES WC2 is an entirely different unreleased title!

The sequel appears a lot more technical than the original, basically because of all the options and choices on offer. The amount of onboard information you can punch up with a slight slap of your joy pad is staggering.

Blaster Indicator, Auto Targeting, Left VDU, Right VDU, it all gets a bit confusing after a while. If you enjoyed the first in the series then you should love this. Big improvements have been made all round and there's a lot more depth to it than the original. But definitely one for the flight sim freaks.