Through the Moongate Part 2 Campaign Takes Off

Andrea Contato and team have launched the Kickstarter for the Through the Moongate sequel. Part 2 is titled "From Wing Commander and Ultima VII to Portalarium" and promises to capture the historic significance of Origin's Wing Commander development in the '90s and beyond. Some 40+ former Origin employees were interviewed for this work, so it looks to be a very well rounded effort.

As an extra bonus, fans who opt to pledge for a hard cover copy of the book will also receive a special Wing Commander bookmark with new art by Denis Loubet, the senior Origin artist who led art direction on the first few WC games. That tier costs €50 plus an additional €24 shipping to many places, so it's not cheap, but who can resist an exclusive Wing Commander bookmark?! I'm sure the in-depth Origin story will be a fun read as well! Digital and soft cover editions start at €15 and €25 (but do not include the bookmark!). The project has had an enormously successful first day with nearly $19,000 of the minimum $27,679 threshold already taken in. There are some high dollar levels with cloth Ultima art, Akalabeth port and Lord British autographed certificate that are going fast. You can find the campaign and pledge here. 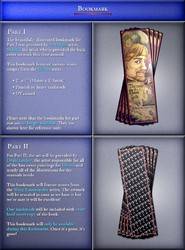 If you’ve ever played a computer role-playing game (CRPG), chances are that Ultima played a part in its inspiration. Created by visionary Richard Garriott, and produced by his company Origin Systems, Inc., Ultima is one of the most important and influential CRPG series in the world. Through the Moongate illuminates the path of the Ultima games' history and the creative people behind this landmark series. It also covers some of Origin's other games, especially Wing Commander, and touches on several contemporary titles you may have missed. Many of these exciting tales have never before been told. If that intrigues you, then won’t you step with me... Through the Moongate?

As I traced the paths of the Ultima games and those who worked for Origin Systems, I began to realize the multitude of games that would not be possible without the influence of Richard Garriott, Origin Systems, and the Ultima series. To ensure their place in history, I've also included special coverage of the Wing Commander and Ultima Underworld series, plus other significant video games of the era. CRPGs, action, adventure, and strategy games such as Space Rogue, Wolfenstein 3D, Deathlord, 7th guest, Jane's Combat series, OMEGA, MUD1, Meridian 59, Lineage, and Tabula Rasa. I’ve also included a special look at cancelled titles such as Times of Lore 2 and Fire Horse.