Pick Your Own Golden Age of Wing Commander

Today's new poll asks what your favorite year was for Wing Commander. Rather than looking at a particular product, this survey examines which cluster of items at a given time you think was best. The groupings are approximate. For simplicity we didn't list everything, such as how Secret Missions 2 falls into 1991 for example. A few years are highlighted by ports where they are particularly noteworthy, but we skipped most of them. The GOG and Baen releases are also spread out over quite a bit of time, so we just highlighted when the bulk of them came out. If there's a case to be made for something else, let us know in the comments!

The last poll asked what platform you'd be most interested in for a new Wing Commander game. The Quine has been an option in most of the previous iterations of this question, but it never got all that many votes. It's interesting how popular it was this time around. Last time, the PS4 narrowly edged out the Xbox One, but the Xbox One X came out ahead this round. The PS4 Pro and Playstation VR combined to have a comparable percentage, but PS Vita was also removed.

Wing Commander Meme of the Day: Roll Safe Think About It

He's obviously not referring to the P-64D 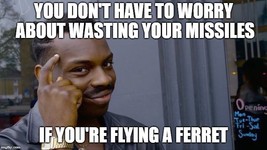