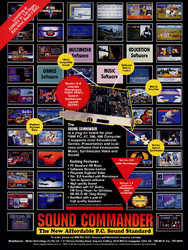 Here's a nickel's worth of free marketing advice: if it's 1991 and you are trying to sell a PC game it does not hurt to make sure it has the word 'Commander' in the name. The degree to which Wing Commander was a success means that an incomplete list from those years includes Air Commander, Flight Commander, Tank Commander, Air Force Commander, Robot Commander and many more. And the tie-ins didn't stop there: there were even a host of hardware peripherals that tried to ride Wing Commander's coattails. For example: today's sound card, the SOUND COMMANDER. 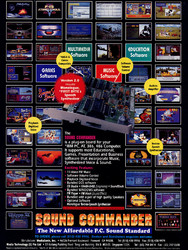 Aside from the similar name, why does the Sound Commander appear in this space? Eagle-eyed viewers will note that there are two Wing Commander screenshots in the advertisement: a shot from the Hornet cockpit and one of the Tiger's Claw lounge from before Enyo 1. MediaSonic would have requested these stills from Origin (and the other developers represented) and then used them to promote the card. These advertisements (in two versions, with and without reference to Comdex) appeared in three issues of Computer Gaming World running from November 1991 through January 1992. You can find the entire issues in the Computer Gaming World Museum.

Why does it look so dark? That's because in 1991, advertisements were laid out by hand (along with anything else printed: game boxes, hint books, magazine articles) and there was no such thing as a readily compatible screen grabber. Instead, screenshots were captured with traditional film cameras that literally took a picture of the screen. In this case, the Hornet cockpit and the Tiger's Claw lounge are a publicity stills provided by Origin and then set up in the advertisement by MediaSonic or their ad agency. You may well recognize these same screenshot in other advertisements or in magazine reviews. Origin would create slides duplicates from a small selection of film negatives which they would provide to advertisers, reviewers and other interests (Joe Garrity has many of these source slides archived at the Origin Museum.)

Want a Sound Commander of your own? They are not especially sought after, but do regularly appear on eBay (a 'Sound Commander Pro' model is listed as of this writing.) Just remember, it doesn't actually do anything special in Wing Commander I... the only connection is that the game supports Ad Lib sound and the Game Commander is Ad Lib compatible.