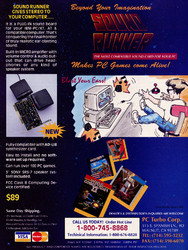 Multimedia! The year was 1992 and the buzzword was inescapable. The meteoric rise in home microcomputer power (alongside the massive success of multimedia games like Wing Commander) created an audience hungry for high resolution graphics, ultra-complex game controllers... and though we take it for granted today, realistic sound, music and speech.

As a result, countless hardware manufacturers took to the market to face off, each hoping that their particular product would be crowned industry standard. The results of this battle are felt today: graphics and video standards decided in the marketing realm of the early 1990s remain the de facto standards today, with the ultimate victory in the sound arena going to Creative Labs' Sound Blaster. We remember the victors, but we quickly forget the countless also-rans who once fought for their piece of the multimedia pie.

In modern game development, hardware partnerships are a high-value necessity. Companies like Microsoft, Sony, Intel and others frequently invest millions of dollars supporting game projects that will buoy their platforms. What's the best way to make sure your processor, VR headset or console 'The One'? Make sure it's the one that best or exclusively plays the games the audience wants. 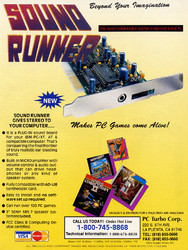 In the early 1990s, the stakes were a little smaller: million dollar budgets were unimaginable, and hardware and software companies instead typically settled for either a quid pro quo 'you advertise us and we'll advertise you' deal or an arrangement to purchase discount copies of older games for bundled releases. In this irregular series, we will examine advertising from a range of hardware partners that featured WING COMMANDER in some way. Some of these, like Intel's Pentium, will be familiar... others will be long forgotten evolutionary dead ends.

To wit: today's advertisements come to us courtesy of Computer Gaming World, via the fantastic Computer Gaming World Museum. The first (blue) advertisement appeared in the February and March issues, while the later yellow version ran from April through August. The SOUND RUNNER from PC Turbo Corp was an 8-bit Ad Lib compatible sound card. (The later ad is a modification of the original's template with color changes; swapping between them will keep the Wing Commander II box in exactly the same place!)

While the ad copy makes it sound like the second coming, the reality is that it's a budget copy of the then-popular Ad Lib sound card. Creating an Ad Lib compatible sound card in 1992 was cheap and easy as such things went, and they were attractive for budget-conscious PC owners. The $89 price tag was the real selling point, compared to $200 for a brand name Ad Lib or $300+ for a Sound Blaster (or much more for a Roland card.) The Sound Runner is by no means alone in this attack of the clones: the July CGW alone includes similar advertisements for the similarly-forgotten "Sound Master II," "Thunder Board," "Sound Galaxy NX," "Sound Commander fx" and "Sound Galaxy." (At least one of which we will revisit!)

Ironically, the Wing Commander game presented here is the one that drove the stake through the heart of all the Ad Lib compatibles. Vengeance of the Kilrathi's support for full speech via the Sound Blaster's digital audio (PCM) helped define Creative Labs' product line as the winner in the sound wars... while simultaneously driving the Ad Lib to an early grave. Very little information on the SOUND RUNNER survives today; Google finds only these advertisements, and a deep dive through Usenet archives suggests that no one was even talking about it in 1992.

Did you own a SOUND RUNNER? Did you use it to play Wing Commander II or Ultima VI? If so, we'd love to hear from you!