Red Alert 2's On The House

Electronic Arts' latest game to go on the house is Command & Conquer Red Alert 2. Titles in this program briefly become free to download and keep via EA's Origin games storefront. Wing Commander 3 and a number of other classic Origin Systems titles have been given away as a part of this program over the last couple years.

The C&C series has had an interesting run with several incidental links to WC. It began as a hit real time strategy game made by Westwood Studios in 1995 (the series turned 20 on August 31!), who were also purchased by Electronic Arts. Like Wing Commander, this afforded bigger budgets that resulted in some relatively big names starring in well done live actor FMV cutscenes. While space sims went somewhat dormant, EA doubled down on C&C and invested heavily in promoting multiple sequels that continued the FMV tradition through Command & Conquer 4 in 2010. Malcolm McDowell even starred in 2009's Red Alert 3: Uprising, which resulted in a somewhat bizarre advertisement for the game that entirely referenced footage from Wing Commander 4. Things have been relatively dormant for the last five years, except for a free to play MMO released in 2012. But RA2 is a fantastic game, grab it free here! 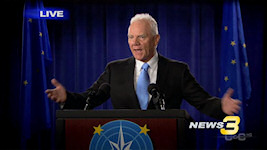 In related news, EA announced earlier this year that Origin accounts would be known instead as EA accounts. It seemed at one point like this might mean the Origin service itself would be rebranded, but several months have passed now and there don't seem to have been any significant changes.