The next installment in our series of old Prophecy reviews is taken from the March 1998 issue of PC Home. This very positive review from a Wing Commander veteran praises the "stunning" 3D-accelerated graphics, the size of the capital ships and the plot. The reviewer is saddened that the multiplayer feature didn't make it into the final game, but fortunately HCl fixed that for us years ago. The editor included a second opinion which only confirms the final verdict: Prophecy scores 90%. Thanks to Pix's Origin Adventures for these great scans!

We've got good news for Wingnuts who had their hearts set on an August 6 Wing Commander viewing party! Shipping notifications have been sent out to those who ordered the Blu-ray from Target. This bodes well for chances that other retailers will begin to ship/sell stock in the next few days, and it suggests that the "August 13" street date floating around is either an error or otherwise miscommunicated. Certain retailers "pre-ship" their discs so that they arrive on a game or movie's street date. The order below was placed with standard shipping, so the actual delivery window is up in the air at the moment. However, we do expect Amazon to ship their copies within a day or two with arrivals scheduled for Tuesday (or even Monday for a few lucky fans!). There may still be time to get your order in for release date delivery! Due to the wide variety of major retailers listing the disc online, we also expect it to make in an appearance in stores. We'll be out in force on Tuesday to hopefully snap shots of a new WC product on shelves - feel free to send yours in as well! 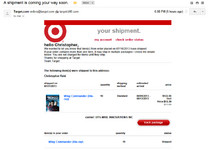 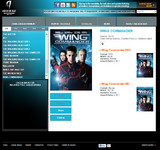