Time to See Your Vet, Kitty!

To commemorate the amazing news that the Wing Commander Academy series will soon be released on DVD, Klavs has put together his own rendition of the upcoming set's cover art. A pair of his gorgeous Scimitars take on a wing of Dralthi - a scene often repeated in the television show! 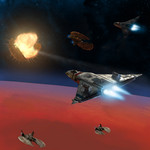 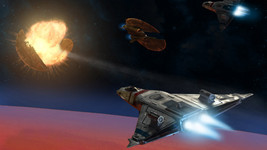 Thought I'd try my own take on the WCA DVD cover. Hope you guys like it!

Apologies to Howard Day for stealing a shot of one of his Pioneer explosions, it just worked so well!