Steady Progress Made on Images & Missions 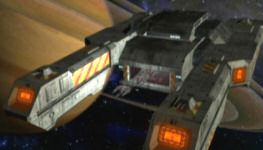 Dundradal has a quick status update on WCPedia updates. A few dedicated fans are hard at work, but more volunteers are always needed. Visit Crius.net if you'd like to help, or check out the most recent updates here.

Wedge has been a image replacing machine the last week! He's been replacing a lot of the crappy images we uploaded at first and replacing them with nicer ones.

The rest of us have been eating away at a variety of projects. I'm down to 2 WC1 missions to complete for basic article format. I've got the SM1 and SM2 scripts from LOAF ready to go when WC1 is completed. So this summer has been pretty productive. Let's keep up the good work in the final month before the bday!

Chris Roberts' Ascendant Pictures company has been acquired by Bigfoot Entertainment. Ascendant was an expansion of the Point of No Return endeavor, which was briefly involved in the preproduction of a Wing Commander live action television show. Some of the bigger movies to emerge from Ascendant were Lord of War and Lucky Number Slevin. Check out the full release here.

Founded in March 2002, Ascendant Pictures integrated the creative independence and budget sensibility of Indie film companies with the production and market savvy of major studios, and quickly became one of Hollywood’s most promising upstart film companies. Furthermore, Ascendant developed a foreign distribution operation that distributes its films through output arrangements with major territorial distributors and broadcasters.

"This development strengthens our portfolio of film titles," said Kacy Andrews, CEO of Bigfoot Entertainment. "And we believe that this acquisition will help springboard us into the distribution arena which is Bigfoot's primary focus this year."

"We are pleased that Ascendant Pictures has become a part of the Bigfoot Entertainment family," said Chris Roberts, Founder and Chairman of Ascendent Pictures. "We do believe that this will positively impact the industry through the consolidated efforts and resources of bringing the combined company’s arsenal of titles to market."

Titles that will now come under Bigfoot Entertainment’s rights under this new arrangement include completed films such as Who’s Your Caddy? (2007), The Big White (2004), Ask The Dust (2006), Lord of War (2005), and Lucky Number Slevin (2006), as well as other Ascendant Pictures’ titles in the works.

Key personnel of Ascendant Pictures will remain on board in the newly-formed Bigfoot Ascendant Distribution LLC to ensure a smooth continuation of operation under the new management team.

Ascendant Pictures is an independent film development, production, finance and foreign distribution company. Ascendant combines the creative independence and budget sensibility of groundbreaking “indie” film companies with the production and market savvy of major studios. Ascendant is striving to identify, develop and produce films in a variety of genres with compelling stories and fascinating worlds that inspire and captivate global audiences while having the potential to grow into franchise entertainment properties. With the expertise and experience of its principals, Ascendant has the distinct ability to move films beyond their linear film medium into the interactive entertainment market.

Founded in 2004, Bigfoot Entertainment is an international entertainment company producing independent films for the global marketplace. The company finances and develops feature films, documentaries and reality TV shows, many of which have received industry accolades, festival awards and have been distributed throughout the world. Featuring both well-established and up-and-coming American and international talent, Bigfoot releases have shot on location worldwide including the United States, Hong Kong, China, Africa, Europe and Vietnam. Bigfoot Entertainment produces many of its projects at Bigfoot Studios, a wholly-owned subsidiary that encompasses six sound stages and on-site state-of-the-art post-production facilities.