Mark Smids has added a neat new feature to his Wing Commander Arcade scroller shooter project. In addition to keyboard control, the game now supports input from the Nintendo Wii Remote. Anyone with a Bluetooth uplink and a Wii controller can try out this impressive addition right now. The game itself is still in demo form, but it's already pretty fun. Additional stages, ships and background terrain will be added as development continues. Download WC Arcade here (1.8 meg exe) and check out a controller demonstration here (3.8 meg avi or YouTube, thanks to AD). 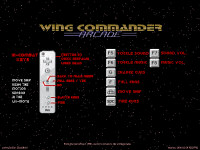 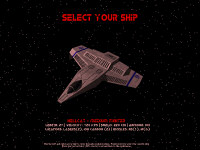 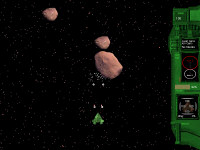 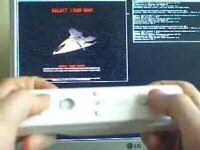 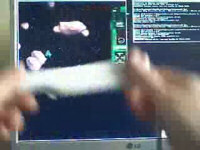 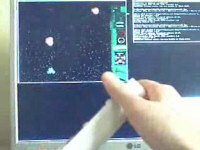 It is now possible to connect a Wii-mote to the PC (using a Bluetooth connection) and use the motion sensor inside the Wii-mote to fly the ship (roll/pitch) and of course use standard button actions (shoot, full guns etc.). In our project we use the Wiiuse API to obtain data from the Wii-mote. We think this is a fun addition to the WCA project. Let us know what you think of this Wii-mote feature!

How to connect the Wii-mote to your PC:

Before running 'Wing Commander Arcade' perform the following actions:
1 - Make sure your PC is able to send and receive Bluetooth signals (USB dongle or integrated Bluetooth).
2 - Install the latest Bluesoleil Bluetooth driver / connection tool.
3 - Open "Bluetooth places" by clicking on the Bluetooth icon in the system tray.
4 - Press (and hold!) buttons 1 and 2 of your Wii-mote and click on Search Devices in the "Bluetooth Places" window.
5 - After a few seconds the device should be recognised as a 'Nintendo RVL-CNT-01', the status should be Idle.
6 - Now again press and hold buttons 1 and 2, right click on the Nintendo RVL-CNT-01 and press Connect. The status should change from Idle to Connected.
7 - Release the buttons 1 and 2 and start Wing Commander Arcade by running wca.exe


NOTE: Steps 1, 2, 4 and 5 only need to be performed once. When you want to run 'Wing Commander Arcade' in Wii-mote controlled mode again, only perform steps 3, 6 and 7.

What's still to be done?

A lot. In the end Wing Commander Arcade should at least contain 10 playable stages and 5 playable ships (as the game progresses). Furthermore we would like to have some ground missions to get the typical Tyrian look and feel. Also we will implement a shared highscore database in which all player scores will be collected. As the game progresses we will release more test builds and hope to have a larger test group which may give us some feedback. We will also develop a user friendly terrain/map editor, so you will be able to create your own stages/backgrounds/etc.

Wing Commander IV is launched -- as is the Origin website which many of you may remember from way back when. There's even a picture... it certainly brings back memories of my misspent youth. Speaking of pictures, be sure to look at the actual PDF - it's chock full of Wing Commander IV and Darkening development team snapshots.

CNN was there, so was NBC's Today show, HBO and Delta Airlines' in-flight TV show. Axcess, Insider Magazine, Knutson Syndicate, Associated Press, the LA Daily News and other Los Angeles media were also there. They came to witness Wing Commander IV and see Malcolm McDowell and Mark Hamill donate their costumes from the game to Planet Hollywood. The costumes represent the first memorabilia from a CD-ROM game to be donated to the internationally famous restaurant. Within a few weeks, restaurant management will determine which of the 30 PH locations will become the permanent home of the Wing IV costumes.

After the presentation, the press got a first hand look at the new game. Many actually sat down to play it themselves while others just watched in amazement during the expert product demos from ORIGIN's own Frank Roan, Tony Morone and Patrick Bradshaw. Those who wanted to see WCIV in all its grandeur watched one of the game demos in a mini-theater complete with large screen projection system, plush theater chairs and outfitted in surround sound. George Oldziey's musical score never sounded better.

And they thought it was just another computer game. Let's just say that after last week's WCIV launch, there's a new found respect in Tinsel Town for the kind of movies you play on your computer.

Don't look now, but the Wing Commander IV media barrage is about to begin. Check out the article on the Planet Hollywood press launch on page one. Meanwhile, Mark Hamill has been busy drumming up hype for the game. Last week alone he made appearances pitching WCIV on Jay Leno and Mike and Maty. In the January issue of PC Entertainment, editors honored Hamill for his acting in interactive projects with a Lifetime Achievement award. Also, in the new PC Ace magazine, Steve Kent added more praise on the man who plays Col. Christopher Blair. In a WCIV preview, Kent wrote, "Mark Hamill has emerged as one of the first real stars of interactive motion pictures."

Believe it or not, WCIV's first review is out. EAUK send out a beta copy of the game to PC Zone magazine in England back in December. Thinking the game was going to sign off the day after they sent out the beta version to the magazine, PR folks in that office were stunned to learn instead that the game had been pushed back two more months. Despite the average score of 85, the writer of the article did manage to say some good things about WCIV in the cover article. "The most impressive cut scenes ever seen. The most cinematic gaming experience you will find." Bottom line, he says, "Great movie, so-so game." We'll see what he says when he gets the final version.