EA Replay is not the only Wing Commander game that gets slightly different box art in Europe and North America. Here's one that many of our readers may not have seen yet: the European cover design for Wing Commander IV. The cool red makes way for larger shots of Blair and Tolwyn with a Black Lance symbol looming between them. A Lance fires a different set of guns and the Banshee gets shot up less. The back side focuses on the interactive movie elements in a slightly different way and uses some different screenshots from the game.

In August we also showed you the different Privateer 2 box designs.

It's been another blazing fast year, and it's already time to prepare for our annual fan awards. Scores of Wingnuts are actively engaged in dozens of different endeavors, and next month we'll begin taking votes for Fan Project & Web Site of the Year to recognize some of them. Before the contest begins, visitors can submit suggestions for nominees. You can find past winners listed here. Standoff, Gemini Gold, WC Saga and Fleet Tactics took the top spots in 2005. Email vote@wcnews.com to recommend Wing Commander web sites, game mods or original projects that helped make 2006 an exciting year for fans. 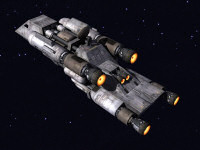 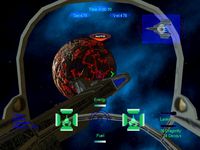