For those who haven't been keeping a close eye on Wing Commander creator Chris Roberts, AD came across the production notes for the recently released Lucky Number Slevin. They include an updated version of the biography posted to his Ascendant Pictures production company website. The document has various quotes about his involvement with with Slevin project and boasts about his success with the Wing Commander series. You can grab the small pdf here. Mr. Roberts is also a producer for half a dozen other projects due out over the next couple years. Expiration Date, Who's Your Caddy?, Outlander, Black Water Transit, Grounded and Seasons of Dust are all in the queue. Note that the fourth paragraph is incorrect. Digital Anvil was closed prior to publication of this biography.

Chris Roberts founded Ascendant Pictures in spring 2002 and in just a short time, established himself and the company as a force in the world of independent film production and finance. In 2004, Roberts earned an Executive Producer credit on THE PUNISHER and produced THE BIG WHITE and LORD OF WAR.

In 2005, Roberts served as Executive Producer on THE JACKET and the upcoming Robert Towne film, ASK THE DUST. The end of 2005 finds him prepping for two films aiming for a spring 2006 start: Neil Jordan’s historical drama, BORGIA starring Colin Farrell and Scarlett Johansson, and the effects laden sci-fi Viking project, OUTLANDER. Roberts will also serve as Executive Producer on BLACK WATER TRANSIT.

Prior to founding Ascendant, Roberts was Chairman and CEO of Digital Anvil (DA), the game development and digital effects company he founded in 1996 with funding from Microsoft and Advanced Micro Devices. Roberts guided DA’s growth to annual revenues of $14 million, prior to the release of many of its games in development. His innovations changed the gaming industry. His games were the first to perfect the use of 35mm film as narrative in interactive game titles, and DA became the first interactive entertainment company to produce a game title, WING COMMANDER, into a $25 million feature film, directed and produced by Roberts. The film starred Freddie Prinze Jr., Saffron Burrows and Matthew Lillard.

In 1987, Roberts joined Origin Systems, Inc. (OSI), which was later acquired as a wholly owned subsidiary by Electronic Arts (EA) in 1992 for $30 million. Roberts was instrumental in OSI’s growth from a company with $4 million in annual revenues to a company with annual revenues of $50 million. In 1990, Roberts developed WING COMMANDER, which set a new standard in PC games and evolved into a franchise series of game titles, all developed and produced by Roberts. With its cinematic quality, clearly developed storylines and well-known actors, the WING COMMANDER series created a whole new genre within the gaming industry known as the "interactive movie."

A gaming wunderkind, Roberts sold his first computer game at the age of 14, and by the age of 20, Roberts had developed three #1 hits in his native U.K.: MATCH DAY, WIZ ADORE and STRYKER RUN.

It doesn't take long for EA to put people to work. It's been less than two weeks since the acquisition accouncement was made, and it already appears that personnel from EA Mythic will be joining the folks at EALA to assist with Ultima Online. This is just a simple creative partnership for now, but it sounds like the UO Live team is eager to see what sort of ideas their East Coast counterparts can come up with.

These are exciting days for MMORPG fans here at EA. With the acquisition of Mythic, the UO team will be working with the creative folks who brought us Dark Age of Camelot and are hard at work on the spectacular-looking Warhammer Online: Age of Reckoning. I’m thrilled that the UO team and Mythic will work together to forge Britannia’s future.

There is much to talk about with our new partners, and it will take some time to review and finalize our plans. Because we need to take that time, we are postponing the announcement that we were going to make this week. The in-game fiction cycle will take a break for a bit and will return soon.

See you in Britannia,
Darkscribe

Despite some issues that were originally a concern, it seems that the Space Shuttle Discovery is still set for a July 4th launch. This'll be the first shuttle launch on the US Independence Day, and hopefully it goes off without a hitch. As with all events of this nature, fans are welcome to count down with us in #Wingnut. If you'll be out doing other things on Tuesday, stay safe. 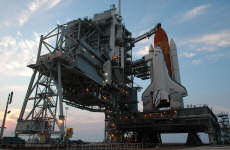