Variations on a Theme

Looking for more ways to have action with your WC:CCG cards? By now you've probably collected all the best cards... but is hitting your opponent with Thunderbolts as quickly as possible still fun? The series' creator, Don Perrin, posted a series of interesting 'theme decks' to the Usenet shortly after the game was released in August, 1995. If you're looking for a new gameplay experience -- and after eleven years, you should be -- give them a try!

Hi! Sure I can go over some of the theme decks bashing each other here at Mag Force 7.

The Rachel and her Toys Deck: Rachel Coriolis (or Nickodameus on the fur side) provides one medal point to a flight with a weapon card. Every fighter that launches has a weapon. Pilots are optional. I send lots of torpedo carrying TBolts out and try to go after the carrier directly.

Four Arrows for your Carrier Deck: This one uses lots and lots of torpedo mounts, torpedos, a bizillion maneuvers and, of course, Arrows. You fly out there with a mit full of maneuvers and knock down heavier fighters (you have a far better maneuver rating than their slower stuff) and then swarm the carrier for two hits. This one's worked twice out of four games, so I may have to beef up my battle damage cards. They have the psychological effect that players seem to need to take the fighter home to fix it. While they're home, I'm doing torp runs on the carrier!

Basic Plodding Doom Deck: I use this one when I play Jeff Grubb and I'm playing Kilrathi. I play lots of Vaktoths and Strak'has, lots of attack weapon systems, and very few maneuvers. I try to use as many medal producers as possible. Out they go, and just shoot everything in sight.

Moneybags Deck: This is the deck that Jeff uses against me when he plays Terran (and I must admit, it works better than my basic plodding doom deck). He uses a few heavy fighters, lots of mediums, Transports and Admiral Tolwyn. He may spend two in a turn, but he just went up four. He uses lots of expensive luck cards to pound me into salt.

Space Control Deck: Either side can do this one (although I haven't tried it yet). Lots of little fighters and lots of Nav Point Modifiers (the ships). You go out, grab space, and hold it against big odds. You can go either for your opponent's points or his carrier with this one. Like I say, I haven't tried this (hey, something to do tonight).

I hope that this helps. Let me know any ideas you guys have come up with.

Antman is still plugging away at his Kuiper Project and has decided to see how a few Wing Commander ships look rendered with the Torque engine. He's recreated several designs from WC3D. They came across fairly dark, but you can see the results for yourself below. 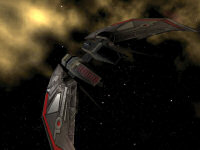 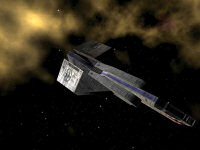 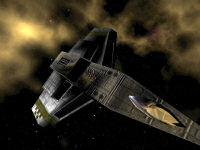 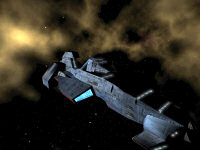 I am currently working on a flight engine based on Torque called the Kuiper Engine. It is fairly modern, it is a shader-compatible engine that uses D3D9, et cetera. The game I am writing is not a WC game itself, but I decided to look at how some WC models would look inside it.