Although channels like Cinemax and FOX have been showing the Wing Commander Movie more often lately, it's been a while since we've spotted the high definition version on tv. HBO, one of the original channels to premiere the HD WC Movie, will be showing it several times this month. This is an exciting opportunity for fans to view the film in much greater detail, since far more people have the hardware to do so than when the HD version originally premiered. Quite a few neat things should reveal themselves when the scenes are shown in 1920x1080 pixels. In addition to the times listed for HBO High Definition, regular HBO, HBO2, HBO Zone, HBO Family and HBO Latino (Freddie Prinze Sr was half Puerto Rican) all list numerous scheduled airings in the near future. The next regular showing will be on HBO Zone Sunday morning. Wingnuts have until Wednesday, January 18, to get their high definition setups ready.

Some of us are all set to watch the movie in high def, but archiving a copy or grabbing high resolution screencaps seems a bit tricky. If you'd like to help us out, click the Discuss link below.

In the year 2564, a rookie fighter pilot and his pals hold the fate of the human race in their hands during an outer-space war between humans and a nasty race of aliens. Based on a popular video game. Also with Tcheky Karyo, Jurgen Prochnow (The Seventh Sign), David Suchet and David Warner (Titanic).

You can find many more show times here. 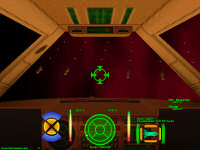 The Standoff Episode 3 Simulator Scoreboards have been a big hit. Dozens of fans have logged in their best marks, and the rankings change daily. However, on some configurations, the simulator has crashed, and the game's development team is urgently trying to resolve this issue. If you've had this happen, help isolate the bug by posting the details of your situation to the Forums.

We're trying to fix a couple of bugs in our simulator missions that could be very annoying when you're on your way to getting a high score... and we need your guys to help us with that.

The first problem is that sometimes, on certain machines, the game crashes at the start of a new wave in the gauntlets. We haven't figured out a good way to reproduce that bug, so we don't know how to fix it. What we need from you guys is that anyone who experiences one of these crashes gives us a bit of information on under which conditions the crash has happened:

That'll allow us to see if there's anything in common between the different systems which experience this crash, which is the first step in trying to fix it.

If you haven't suited up yet, check out the How To Guide.