Cyberion has prepared a zip with a variety of things for Razor Fans. The package contains the lightwave files for his model, a 1024x wallpaper and a 2 megabyte test video of the Razors in motion. You can grab it all here. 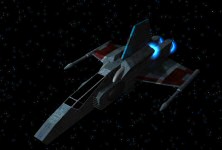 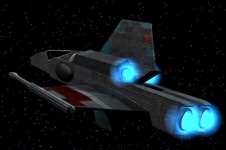 I modeled it especially for the video sequences, so it's originally high detailed and should look just great in video. I always dreamed to model this ship and here it is. The model is of a high quality, although the textures aren't. I'm not a drawer so excuse me for this part.

Animators will find the ship pretty flexible. I've made every part of it on the different layers, so if anyone wants to blow ship into the pieces, he may do it. In time I want to make a test video of blowing the ship apart. First goes engine, then wings, than Coller system, cockpit and so on..... it falls apart in other words. The multiple layers of this model allows you to do it. ;-)

We reported a few weeks ago that a number of Electronic Arts employees were seeking some sort of suit against the company for extensive overtime and rough working conditions. The New York Times has weighed in on the story.

Still, the company is a generous warden: free laundry service, free meals, free ice cream and snacks. The first month, the E.A. employee recalled, he and his colleagues were delighted by the amenities. But he said they soon came to feel that seeing the sun occasionally would have had more of a tonic effect.

This employee, who has not had a single day off in two months, is experienced in the game software business. But he said he had never before had to endure a death-march pace that begins many months before the beta testing phase that precedes the release of a project.

The article also notes that this isn't limited to Electronic Arts or the software industry. EA, as the biggest game publisher, is the most noticeable, but other software companies have similar practices. The relatively high wages compared to non tech jobs are probably most appealing, and others seem to genuinely care about the games they are developing. This will probably be a developing story as the software industry continues to mature. You can find the complete article here.