It was early 2001 when we were eagerly awaiting the final installment in Peter Telep's Wing Commander movie-based novel trilogy - Pilgrim Truth. Because of numerous delays, an outline of the novel was released providing a chapter-by-chapter synopsis of what would happen in the new novel. At the time, we stored the file on a lousy free web site because of bandwidth issues. Sadly, the novel was cancelled by its would-be publisher despite being completed, however the synopsis hasn't been forgotten. We now have it back on our own server in its original MS Word format. You can download the file here.

On a related note, some of the rights regarding the WC movie will be changing in 2004, which may allow the release of Pilgrim Truth and various things. We'll be renewing our efforts to get the book published should the circumstances allow it.

Just kidding. Next up in our series of polls is the Wing Commander III era. This time the biggest gun in the universe takes on Tin Can Sally. In our last poll the TCS Concordia (62%) crushed the TCS Tarawa (16%). We'll see who wins this round. We archive our old polls here.

Golden SPs Next To Come

It's been a month or two since the last new GBA SP color, so we thought Nintendo might be slowing down. To no one's surprise, they have announced another color though. This time the Starlight Gold color. It appears this one will be a Japan Toys R Us exclusive though. 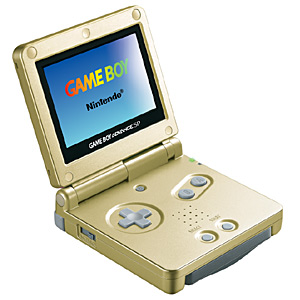