The MCPH has been in service with the CIS for several years. Described in the CCN ship registry as a cruiser, typical reports class it as a "Military Prototype", Prototype Ship or simply "'Capital Ship".

Its distinctive outrigger hull design features what appears to be a large and spacious hangar bay out to starboard, although this usage cannot be confirmed. In addition, the design boasts six military-grade turrets, giving it firepower, if not protection, equal to that of a Military Dreadnought.

Notable MCPHs so far include the Inspectorate, the Protector, the Phoenix, the Wilcox and the Ice Breaker. Messineo Couriers utilizes a pair of MCPHs in this role. The Kiowan pirate clan operates a Prototype as the Warbird. 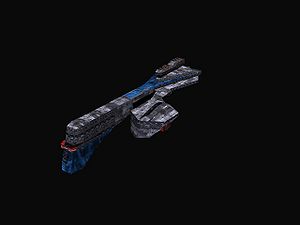