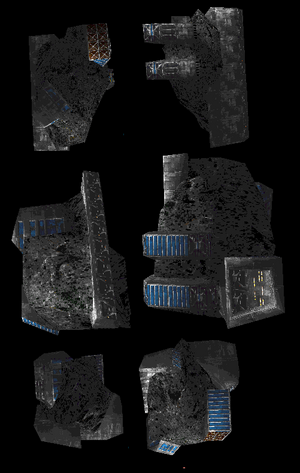 Kappa Labs is a spacecraft and life support testing facility controlled by Kappa BioResources Group, a Hephaestian scientific research corporation. The station supports 743 crewman and scientists. Notably, the station is where Lev Arris’ frozen body was stored for several years, until it was stolen in a pirate attack. After Arris’ departure, the laboratories were shut down and the station abandoned. A cover story about a large scale experiment was announced, but in truth the base quickly became a second rate pirate supply outpost. The station is located in the Dragon Scatterbelt, at Nav. 139.

What supplies you get here are either second-rate or come with "an understanding" that you'll do what you promise — on schedule. Failure means demotion, and death is the only thing lower than where you already are. This illegal, underground operation exudes remorseless greed and desperation. The very walls seem organic and diseased, and no records have been found that document its original construction.