One of the oldest settlements in the Tri-System, the population of Hephaestus has long been too large to be comfortably supported by a planet of its size. Still, as a locus of wealth, power and technology, it continues to draw immigrants. One must be very wealthy in order to buy enough space to live comfortably on Hephaestus, and only a lucky few achieve this. Many thousands more dream of it, and suffer interminable living conditions with the hope that one day, they too might make it big. 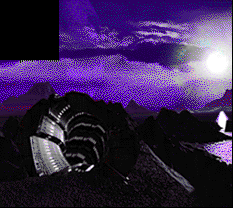 BACKGROUND:
There's a local saying, 'when you're bored of Hephaestus, you must have contracted chronic claustrophobia'. Although this is far from the most elegant aphorism ever penned, you'd be hard pushed to find a truer one: Hephaestus has been the foremost planet in the Tri-System for over 600 years, and, boy, is it crowded. Power, wealth and technological sophistication are the watch words here, and everyone who is anyone seems to end up sooner or later living in a bimeter-square habicube, sleeping if possible, and snatching intravenous meals in between the protracted bouts of serious graft, networking and obsequity necessary to get anywhere worth being. For the small percentage that do succeed, the luxurious ends more than justify the means; estates on Janus IV, permanent suites at the Galactic Gourmet, bouts of gratuitous indulgence on a prolific scale, and all the other hallmarks of success. The only way you're ever likely to see more of Hephaestus than immigration halls and cramped slums is if you're a pirate, a trader or a miner, the only people who make enough credits to pay the exorbitant prices Hephaestus demands: a recent documentary by a Hermes Vidflix team revealed that the price of a glass of Opi-Ola on Hephaestus could keep a Hermes family of four fed for a week. Providing, that is, that the family were prepared to eat straw a goodly portion of the time. (Oh well, that's investigating journalism for you). If you're a trader, you'll no doubt become extremely familiar with the Hephaestan Commodities Exchange all too quickly; it is the chief source of many of the more refined goods, as well as being one of the best-paying importers in the Tri-System.