Jupiter is a gas giant located within the Sol System of the Terran Confederation. It is the fifth planet from Sol and by far the largest of the nine planets. 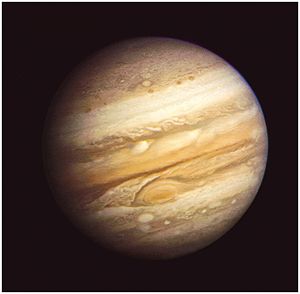 Jupiter, the fifth planet of the Sol System.

Jupiter is a massive, uninhabited world that constantly undergoes massive storms churning across the planet's surface, creating its red, orange, yellow, and brown appearance. Its most volatile storms form its distinctive Red Spot. The planet is surrounded by a series of thin rings composed of rock and other materials. It possesses at least 62 moons, among them the moons of Ganymede, Callisto, Io, and Europa. These four moons are collectively known as the Galilean Moons.

During the Battle of Earth in 2668, the Kilrathi launched a massive armada to destroy Earth. Jupiter's shipyards were among the many to deploy vessels to reinforce the inferior Terran fleet above Earth. Military operations around Jupiter remained largely unaffected by the battle.

After the Terran-Kilrathi War, the TCS Victory, a famed carrier of the War, was placed into Jupiter orbit as an orbital museum. The Terran Confederation HQ remained a major command center during the Nephilim War of 2681.