Cougar:Hey look, it won't be easy but we'll get through it somehow.
Bradshaw: Huh?
Cougar: Well, you just looked worried, that's all.
Bradshaw: Oh, it's not that. It's... Hey, Cougar. What's it like, being married?
Cougar: Huh? Well... Oh, I get it. Sparrow.
Bradshaw: Complicated.
Cougar: Yeah, that's what Spoons said.
Bradshaw: I had no idea how right he was.
Cougar: Well, I hate to say this, but I can't help you. You need to figure this out on your own. And, you need to talk to her.

There is no briefing. This mission in a scramble. 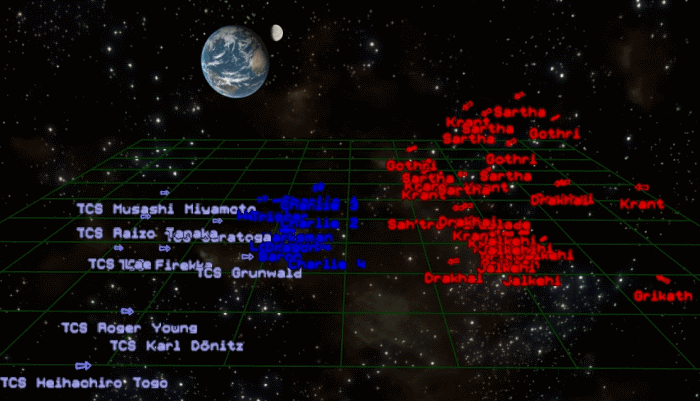 This mission is pretty close to being Wild Weasel the other way around, with two major differences: the carrier at the centre of the Confed group is already crippled, and the Kilrathi forgot to bring (most of) their bombers. There's only six torpedo-carrying craft here (two more show up a bit later) which is what makes the defence of the Saratoga (which, as Lieutenant Freyers helpfully informs you, will go down if it is hit with one torpedo) possible (or at least not tooth-grindingly frustrating).

The difficulty here is in taking down the bombers while not being killed by the Vatari. The Rapier is probably the better choice for this mission due to its superior speed and maneuverability making both intercepting the bombers and dogfighting with the Vatari much easier; this guide assumes you are flying one. Start off by killing Sah'tra Fireblade with a dumbfire missile, preferably whilst he's telling you it won't be him that dies today. It's the bombers we're here for, but he is too accurate and his ship is too powerful - if we let him live it'll be much harder to kill the Grikaths and Gothri. After that, use the map to find the nearest bomber and DF that too, then get the remaining five, taunting them liberally in the hope of keeping them from setting up on the Saratoga (sometimes you get lucky and a bomber goes after the Grunwald). You can use missiles here but they're not much more efficient than guns; I prefer to save my missiles for when they'll be one-hit kills, such as FFs against Sartha.

Once the bombers are down switch to the Vatari, which are the fighters most dangerous to you, and then just continue killing the closest fighter but keeping an eye out for this (periodically checking the tactical map is sensible):

These two Grikaths aren't much of a threat provided you notice them - they're unescorted and the Grikath's not particularly hard to kill in a Rapier - but they will probably kill the Saratoga if left to get on with it.