Anhur is the oldest inhabited planet in the Tri-System. Its population remains deeply divided between the Original Humanists, who oppose all technological advances of the last millenia, and the Pro-Technologists, who embrace these same advances. Because of Anhur's Original Humanist influence, many ruins and artifacts of the Tri-System past remain in use there today. 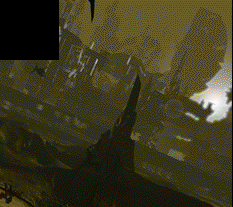 BACKGROUND:
Anhur, cradle of humanity! Alas, it is not the world it once was; a few thousand years of really serious history has turned this once-pleasant planet into a smog-laden, filthy warzone. Anhur today consists of two types of terrain: vast, complex cities where anything of note is based (commerce, industry, space ports, gambling dens, bars, whorehouses and the like), and Everything Else, which is just one grainy, yellow mess studded here and there with the odd resilient remnant of the First Civilisation. The air is without doubt the lowest quality of all the 'breathable' atmospheres in the Tri-System. The water is poisonous to anyone who hasn't spent a lifetime building up a resistance to it, and the local food is a mixture of cheap vat-grown protohydrates and whatever can grow in the horribly damaged soil. Suzerainty of this unprepossessing locale is disputed by two thoroughly opposed factions: Original Humanists, resentful of every technological development past the plough and crossbow, and the more prospective but highly paranoid Pro-Technologists, who are more accurately just Anti-Humanists. Years after the events that spawned this internecine strife, things aren't much better; you've really got to watch your step if you're thinking of trading here. Even wearing an antique digital watch is enough to get you an arrow in the back from some wide-eyed Humanist, whereas the Pro-Technology activists are even more unpredictable; look too low-tech (wear non-synthetic clothing, read a book, be seen to eat anything not grown in a vat) and they'll take you for a Humanist. Appear overtly off-world and they'll know you as a traitor (hard feelings run deep towards all descendants of the 'treacherous' Hephaestans). Of course, there are a lot of people who just try and get on with the rather sordid business of living in this less-attractive part of the galaxy, but by and large 'Quick In, Quick Out' is the rule for Anhur, which is a pity, as there is nowhere in the galaxy which offers such a wealth of archaeological and architectural interest.