Today we have an interesting tidbit for you. Since we know you've always wanted high-res versions of official Wing Commander artwork to use as your computer's desktop background, we have a downloadable pack of Vampire wallpapers. Just download the set here and pick your resolution from the provided images. This is the same splash image used in-game while missions are loading in Wing Commander: Secret Ops.

Just because, I threw something together from one of the original PSD source artwork files from Prophecy, so here's a Vampire wallpaper pack in as many standard resolutions that I could think of. Only the widescreen versions are slightly squashed so that I wouldn't have to cut off any of the ships. I also included a full resolution uncropped jpg of the image too for the curious. 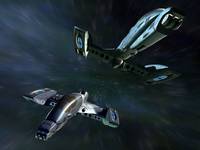