Depending on what part of the globe you live, the long-awaited Freelancer should begin showing up in stores today. It's come a long way from the CIC's first look almost exactly four years ago. I'm looking forward to flying around with some of you. 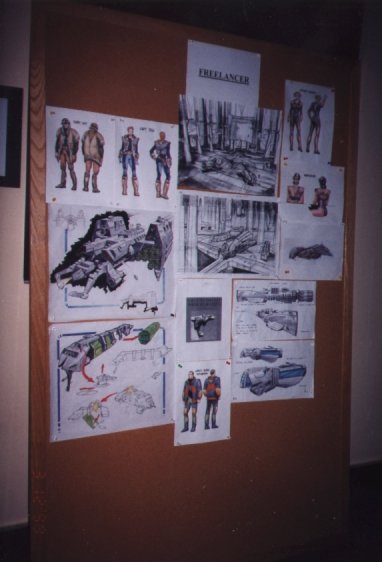 If you look closely, the middle image looks like what became a Patriot Light Fighter in the game. Also, fans of Kolokov's news site are getting together for a party. You can read up on his beta impressions and launch announcement here.

WELL ITS COME DOWN TO THE FINALLY HOUR AND FREELANCER IS ABOUT TO BE OUT AFTER YEARDS OF WATING AND ITS TIME TO PAARRTY. PLZ COME TO THE RELEASING PARTY IN KOLOKV'S CHATROOM FOR PUNCH PIE AND CHIPS AND LOTS OF CONVERSING WITH YOURE FELLOWS FREELACNER FANS (AND GIRLS HAHA) WHEN THE GAME IS OUT