This is part of a series analyzing newly discovered Wing Commander IV continuity photographs. You can find the first post in the series' introduction here. 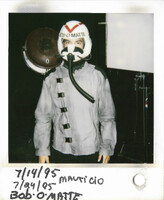 Our next continuity polaroid is a familiar face: it's Bob-O-Matte! Eagle-eyed Wing Commander players will recall that Bob-O-Matte is one of the three Border Worlds pilots who is ambushed and destroyed in the cutscene that opens the Peleus 'jammer' series of missions. Despite his apparent death at the hands of a Confederation Excalibur, Bob-O-Matte appears again in Wing Commander Prophecy reading a tarot deck in one of the game's most unusual transitions. Bob-O-Matte's flying scene takes place in the game's Banshee cockpit set which is a simple triangular backdrop (shots of the instrumentation are reused from the more elaborate Lance cockpit set). As you can see in the photograph, only the top portion of the flight suit was necessary since the shot did not go below the actor's waist. This polaroid is also a great look at both the helmet prop's often-ignored O2 connector and the dyed-grey Border Worlds flight suit costume. 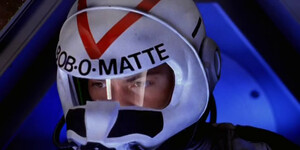 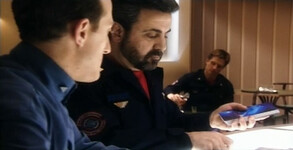 Fans of behind the scenes trivia likely also know Bob-O-Matte's namesake: the FMV games' compositing was enabled by a system called Ultimatte which was operated by a company called BlueScreen LLC owned by Bob Kertesz. Ultimatte + Bob Kertesz = Bob-O-Matte! Although much of his face was obscured in Wing Commander IV, Bob-O-Matte was played by an actor named Mauricio Mendoza in both productions. Mr. Mendoza has had a very succesful career in the decades since Wing Commander, appearing constantly on both stage and screen. His agent has posted a detailed IMDb biography and you can find him on social media.