This is the first in a series of updates identifying props used in Wing Commander's various live action productions. Movie productions typically use a range of props: some (like Kilrathi masks and laser rifles) are fabricated specially for an individual shoot, some (like whirring computer consoles and background decorations) are rented from companies that build generic props that can be adapted to different productions and then reused and sometimes 'real world' items can be used.

The latter is the case today. In Wing Commander III: Heart of the Tiger, 1st Lt. Laurel "Cobra' Buckley fastidiously sharpens an ugly utility knife, apparently a symbol of the psychological damage she has previously suffered as a Kilrathi prisoner of war. Interestingly, Cobra's knife is not specified in the Wing Commander III shooting script and thus is never mentioned in the game's adaptation (like most novelizations, the Heart of the Tiger book is based on the game' screenplay rather than a completed production.) This suggests that the decision to give her a knife was likely made later. 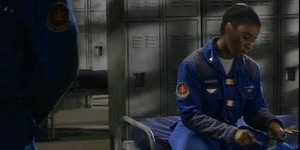 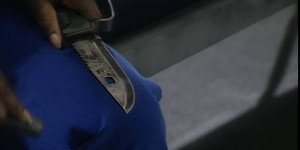 So what is Cobra's knife? She is sharpening Marto-Brewer Explora (or Explorer) knife that dates back to the early 1980s. The Explora is a multi-use "survival" knife which includes both a multi-faceted blade and a variety of tools for survival situations. The knife was designed by true-life Venezuelan explorer Charles Brewer-Carías who has led more than 200 expeditions into the unknown. The handle of the knife is hollow and contains a variety of survival supplies, including a compass, flint and matches for starting a fire, sutures and more. Various external attachments can be added, all with an eye towards survival situations rather than specifically fighting or hunting. It's exactly the sort of knife you would want if you ejected over a hostile planet! You can read more about the Explora here. 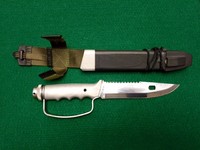 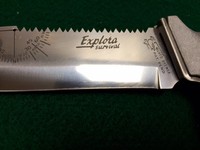 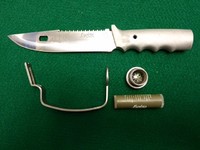 Would you like your own version of Cobra's knife? The Explora is no longer manufactured but it is readily available on the secondary market. At press time, slightly used examples seem to go for between $250 and $350. But can you really put a price on keeping your family safe from the Kilrathi?