"A considerable investment... will well be worth the effort"

A photo of a sheet included with Wing Commander 2 is making the rounds on social media this week. It went viral after Kotaku ran the story, but the original image appears to trace back to Reddit and imgur. The WARNING cautions that WC2's state-of-the-art technology must be installed very carefully - or else! It also advises that the process could take several hours. While a couple hours of this was automated disk unpacking, going through the steps to enable expanded memory and free up more than 580 kilobytes of conventional mem could certainly take a while. And that doesn't even begin to get into sound card jumpers and IRQs... This wasn't the only system spec warning included with WC games. Certain versions of WC2 and Armada also included warnings about the CD-ROM, RAM and processor requirements looming in Wing Commander 3. 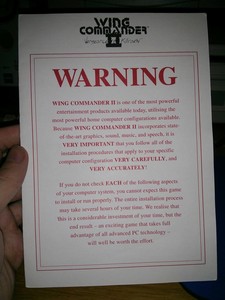